Lewis Hamilton says he is "feeling that fire inside me" as he tries to leapfrog Mercedes team-mate Nico Rosberg at the top of the drivers' championship in Hungary this weekend.

Since the pair crashed in Spain in May, Hamilton has won four out of five races to move to within one point of Rosberg.

"Ever since the low of Barcelona I've been able to cultivate this really strong mental attitude," he said.

World champion Hamilton, 31, has won four times in Hungary, but his last victory at the circuit came in 2013 and he was sixth last year.

"I have incredible support there, so I can't wait to get out on track," said the Briton.

"The past couple of years I haven't had the smoothest of weekends in Budapest - but I know I've got the pace, so I'm gunning to turn that around this time."

German Rosberg, 31, finished eighth in Hungary last year and has a highest-placed finish of fourth at the Hungaroring.

He said: "The battle is on with Lewis and I'm feeling great in myself and great in the car - so bring it on."

Mercedes chief Toto Wolff is expecting a tough challenge this weekend and said the track "plays to the strength of our rivals".

He added: "The Red Bull, for example, is a car that functions well where high drag isn't penalised as much as at other types of circuit.

"In wet conditions and at low-speed circuits such as the Hungaroring, they are a major threat.

"We will need to be flawless to come out on top." 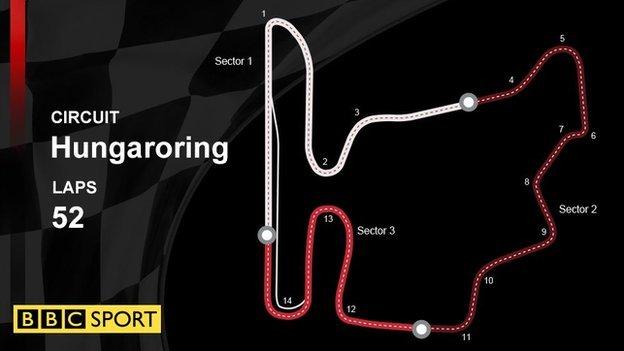