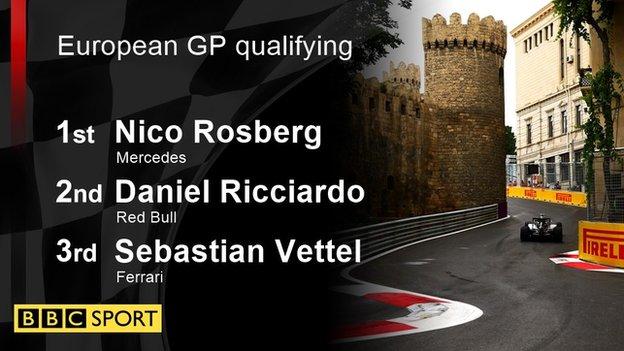 Lewis Hamilton ended a messy qualifying session at the Grand Prix of Europe with a crash, smashed suspension and 10th on the grid.

The world champion dominated practice but a string of errors ended with contact with the inside wall at Turn 11 as team-mate Nico Rosberg took pole.

Hamilton faces a fight in the race to limit the damage to his title bid.

The Mexican's gearbox had to be changed after a crash at Turn 15 in final practice.

Ricciardo pipped Ferrari's Sebastian Vettel with his final lap - improving by 1.3 seconds over his first run in Q3. Vettel set the exact same time as the Australian, but will start behind him because he posted it later.

Sunday's race is live on the BBC Sport website and radio 5 live from 14:00 BST.

Why did Hamilton start making so many mistakes?

Hamilton had looked sublime from the moment he took to the challenging new street track in the Azerbaijani capital Baku, fastest in every practice session until the start of qualifying.

But he never quite got it together when it mattered.

He went wide at Turn 15 in the first session and ended up 0.6secs behind Rosberg, then did a poor first lap in the second session before locking up and going straight on at Turn Seven late in Q2 when on a lap that was at that stage 0.2secs quicker than Rosberg's.

It meant Hamilton had to do a final lap on damaged tyres just to make it into Q3, but such was the superiority of the Mercedes that he still set the second fastest time.

Hamilton was then faster than Rosberg by 0.4secs in the first sector of his first lap in Q3, only to lock up again and go straight on at Turn 15, a mistake that also destroyed Rosberg's first lap as he had to back off for the yellow caution flags.

Then, as Rosberg recorded that fastest time, Hamilton uncharacteristically misjudged his entry to one of the corners around the medieval area of the city and smashed into the inside wall.

His error came on a weekend on which Mercedes were perhaps more dominant than ever before this season - Rosberg was nearly 0.8secs quicker than Perez despite only doing one flying lap in the final session.

Perez's performance was a stunning one by Force India, helped by their Mercedes engine, and he could have been joined by team-mate Nico Hulkenberg had the German not spun in Q2 and then suffered a miscommunication with his team over the timing of his final lap. He will start 12th.

Williams' Valtteri Bottas and Red Bull's Max Verstappen are eighth and ninth after tripping over each other twice at Turn One during the session.

McLaren's Jenson Button was knocked out in the first session and qualified only 19th.

Button seemed to struggle to put a lap together, making a mistake at Turn 15 and running wide and then encountering traffic when he made a last-ditch attempt on his final lap.

"It's not happening," he said to his engineer, as he bailed on his last lap, before uttering an expletive over the radio.

His team-mate Fernando Alonso fared better but was unable to make it into the final part of qualifying for the fourth race in a row.

The Spaniard was 14th, complaining about traffic after his final lap but 0.6secs off making into the top 10 - no great surprise in a car with the least powerful engine in F1 on the track with the longest straight.

It was also a stark day for Renault, whose two drivers Kevin Magnussen and Jolyon Palmer are at the back of the grid - nearly two seconds slower in Q1 than the Red Bull of Ricciardo, which uses the same engine.

But there was an impressive performance from Indonesian Rio Haryanto, who out-qualified his highly touted team-mate Pascal Wehrlein, a Mercedes protege, for the fourth time in eight races.