Formula 1 boss Bernie Ecclestone says he agrees with drivers' complaints that the sport's decision-making process is "obsolete and ill-structured".

The 85-year-old has written to the Grand Prix Drivers' Association in response to its own open letter.

The letter, seen by BBC Sport, says: "It is not always easy to agree with you but you are correct.

"We must, as you have stated, urge the owners and all stakeholders of F1 to consider restructuring its governance."

Ecclestone has asked the drivers to come back to him with ideas about how to improve the situation.

"It is easy to analyse what is wrong. At least it is better to think before you wish," Ecclestone writes.

The drivers were not explicit about the detail of their concerns, but they said some recent decisions are "disruptive", avoid "the bigger issues" and "could jeopardise F1's success". 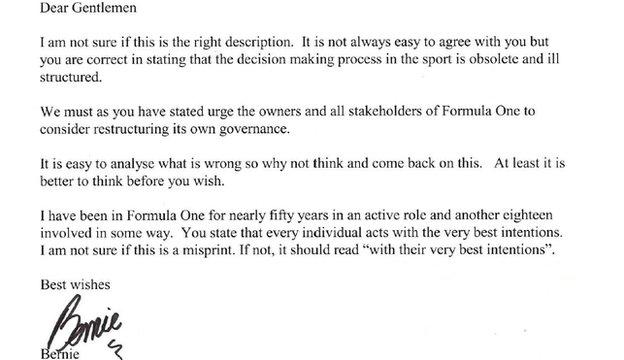 It is known that they are unhappy about recent gimmicky rule changes, with the fiasco over the adoption of elimination-style qualifying just the latest example.

The move towards pay TV is another concern - and their letter came on the day it was announced that F1 would no longer be shown on free-to-air TV in the UK from 2019 as a result of a new deal with Sky.

Among other issues, the drivers do not like the fact that the tyre supplier is chosen on financial grounds alone when many teams and drivers have misgiving about Pirelli.

But the focus of their concerns is believed to be the inability of the strategy group of leading teams, governing body the FIA and Ecclestone to come up with a clear plan for the future.

The strategy group was set up by Ecclestone in an attempt to give himself more power, but in the current decision-making process he has found it impossible to make change because he can be out-voted by the teams.

Ecclestone has complained that what he sees as the stranglehold of Mercedes and Ferrari on rule-making risks "destroying" F1.

Other insiders see decisions emanating from him - such as double points for the 2014 finale, changing qualifying and an attempt to impose last year a cheap alternative engine to race against the current turbo hybrids as the real problem.