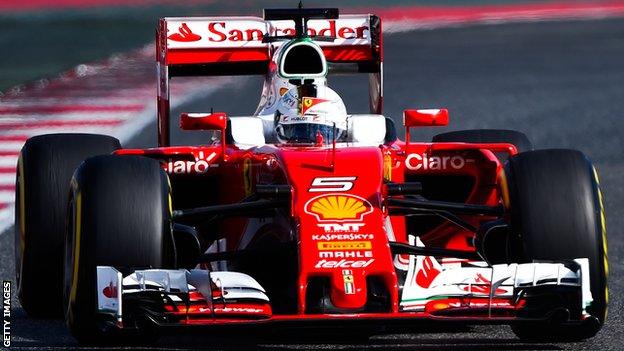 Sebastian Vettel says he believes Ferrari's new car will bring him "closer" to world champions Mercedes at the start of the Formula 1 season.

The question is, how much closer? Well, the indications from the final pre-season test are that it might just be enough for Ferrari to make a fight of this year.

The concern among neutrals after two dominant championships from Mercedes and an imposing performance at the first test last week was that Lewis Hamilton, Nico Rosberg et al were simply going to pick up where they left off at the end of 2015.

But the picture has shifted during this week's second test and Ferrari now look much more credible contenders.

This was underlined when Rosberg said at the end of the test: "We know Ferrari are very close - but we're not sure if we're ahead or behind."

Logic alone suggests that Ferrari ought to pose a bigger threat to Mercedes this year.

In 2015, they were on average 0.6secs down in qualifying. Vettel took three wins - to Hamilton's 10 and Rosberg's six. But two of them came about because Mercedes were compromised in one way or another, and the final one on a bizarre off-weekend for the champions in Singapore.

However, rivals believe Ferrari have benefited in the design of their 2016 car by exploiting a loophole in the limits on wind-tunnel time and computer-aided design research that existed as a result of their new partnership with Haas. It has now been closed.

And Ferrari's engine last year had some layout compromises compared to the Mercedes, which have been addressed for this season.

At the same time, as the Mercedes was by definition more optimised last year, in theory there is less room for improvement.

Having said that, it became clear in a media briefing at Mercedes' engine HQ recently that significant gains are still being made in terms of thermal efficiency - and therefore performance.

And the Mercedes chassis has some very interesting innovations on it aimed at improving aerodynamic downforce.

In short, Mercedes have improved on an already formidable package.

What did testing reveal?

But how to divine the truth from the thousands of laps in the face of so many variables - tyres, fuel load, track conditions, engine mode, etc?

As Vettel put it: "Before it was always a question of how much - or little - fuel everybody was running. Today there are 10 other things that have to be considered when looking at the time sheets.

"So in the end it is all guesswork when making statements about who is where in the pecking order. The feeling is good - and that is what is important for me."

The teams have ways of eliminating many of these variables. But they are always reluctant to give too much away. Partly this is because even the teams, with their mountains of data, cannot be absolutely sure where everyone stands.

From the outside, though, it is possible to have a stab at it.

In other words, you might not know the exact fuel load, but you know the minimum the car must have been carrying and can off-set the lap time against that.

It is far from an exact science and any attempt to "correct" the lap times is inherently flawed.

Nevertheless, apply these "corrections" to the list of times and quite often it turns out that a driver's best lap was not the headline fastest at all.

The best lap of the winter, for example, appears to have been one done by Rosberg on the medium tyre on an eight-lap run on Thursday. Hamilton did an almost identical time on Friday morning

So, take each driver's fastest time on each type of tyre throughout the second test and apply these factors corrected to a soft-tyre time, and you end up with a list of the fastest lap for each team that looks like this:

That's just single lap times. But Ferrari and Mercedes also did race-simulation runs, albeit on different days. And the average lap times for those are:

If those figures are right - and it's a big "if", with all the caveats and so on - then that suggests Ferrari have about halved the gap to Mercedes over the winter.

At that sort of margin, the difference between the two cars could be small enough to ensure that the typical vagaries of an F1 season were enough to make a proper championship battle between two teams.

Hamilton v Rosberg v Vettel and maybe Kimi Raikkonen, too, if he can get his act together. Sounds pretty enticing, doesn't it?

What of the other F1 superstar?

A small deficit, but one marginal enough to enable a world-class driver to mount a title assault in a car that is not as good as the best, are exactly the circumstances in which Fernando Alonso came agonisingly close to winning the title with Ferrari in 2010 and 2012.

A penny for the the thoughts of the final member of F1's "big three", then, if it turns out this way in 2016, because Alonso could have been driving this Ferrari.

The 34-year-old, as he reminded the world in a Spanish radio interview ahead of the final test, negotiated a way out of his Ferrari contract two years early at the end of 2014 because he lost faith that the team would ever be title contenders.

Ferrari were trying to convince him to sign a new contract until 2019, he said (although senior insiders say the team were beginning to feel they, too, needed a change).

Alonso said driving for Ferrari was a "wonderful experience" but that the stress of all those near-misses had got too much and he was not interested in "staying at Ferrari until 2019 to be third".

"I think I would never been world champion there," he said. "Now I enjoy Formula 1 more 10 positions further behind. I wanted a new project and McLaren-Honda was the most convincing."

Well, it is not that convincing yet, judging by pre-season testing.

Honda has undoubtedly made some serious steps with its engine - hybrid energy deployment, a major shortcoming last year that left the engine as much as 250bhp down on the straights, has improved "massively", according to Alonso's team-mate Jenson Button.

But the engine is still a long way off the pace. Even Alonso allows it may be 80bhp down. Some say it could be as much as 100bhp.

There have been flashes of pace from McLaren, and the team have new parts to fit at the first race that were not ready in time for testing. But the best evidence is that they will be mixing it towards the back of the midfield with the likes of Renault and the new US-based Haas team.

Between McLaren and the front is still the best part of two seconds - and the Williams, Red Bull, Toro Rosso and Force India teams.

On the positive side, Honda's new F1 boss Yusuka Hasegawa has made a good first impression at McLaren and this has renewed confidence within the team that the engine can make the promised significant steps forward this year.

The final days of testing were overshadowed by a series of off-track controversies - about the introduction of a new-style qualifying system and the new "halo" head protection system.

The elimination-style qualifying format will be used in Australia after a week of to-ing and fro-ing that many felt made the sport look ridiculous.

The big problem was Bernie Ecclestone's decision to reveal that his FOM company had told him they could not sort out the timing software and on-screen graphics in time, something one senior insider described as "pathetic".

Had Ecclestone kept his mouth shut, the suggestion from the teams to run the last part of qualifying without the elimination system would have been seen as what it was - them doing what they had been asked to do and pointing out any potential flaws.

Now, FOM has apparently decided it can do the necessary after all and the new format has been adopted wholesale. Despite concerns that in the final shoot-out the action will all be at the beginning, followed by a whole load of nothing because no-one has any fresh tyres left to improve his time.

The drivers are not keen. As Hamilton said: "I've generally enjoyed the qualifying we had for the last few years so that's why the changes we've made don't make sense to me in my head right now. But don't knock it until you've tried it and then immediately we'll get comments from the fans."

As for the halo, yes, some drivers don't like it, especially the world champion; yes, aesthetically it leaves a fair bit to be desired; and, yes, seeing it is a shock to the system.

But one wonders if F1 would not already be using such a device if, for example, Alonso's head had been hit by Romain Grosjean's flying Lotus at the start of the 2012 Belgian Grand Prix - a tragedy that was avoided by centimetres.

Alonso was close to Jules Bianchi, who died last July of head injuries sustained in a crash in the 2014 Japanese Grand Prix, so it is no surprise to see that he is one of the majority of drivers who back the system, calling it "a step in the right direction".

It was Vettel, though, who arguably put it best, as he referenced the deaths of two drivers in other categories from head injuries in recent years.

"In principle, I agree it doesn't look very nice," the Ferrari driver said. "It's not the picture of Formula 1 you are used to for a long time.

"But equally if it helps increase safety and saves lives… There would be at least two drivers in the last four years that I remember would still be around, Henry Surtees and Justin Wilson, if we had this type of system.

"It can be as ugly as possible - nothing justifies not having these guys around any more."