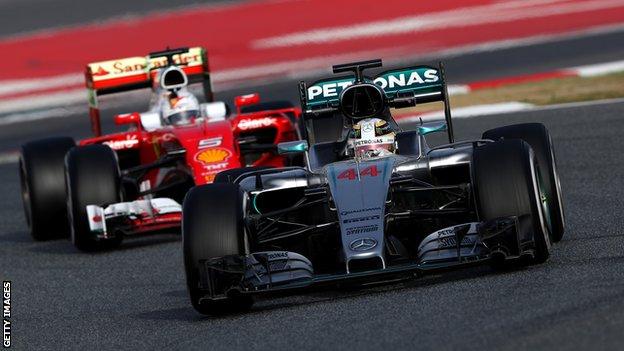 Lewis Hamilton has brushed off claims that his Mercedes team are in a league of their own going into the new season.

Hamilton, on slower tyres, was second fastest on day two of the second pre-season test, behind Valtteri Bottas.

Asked if Mercedes were without rivals, Hamilton said: "I don't think so. Ferrari and Williams look competitive."

But he admitted: "That's what I've been told. I've not looked at a single lap time anyone else has done so I'd be guessing."

Despite his pace, Hamilton said he was not comfortable with his car on his fastest lap at the Circuit de Barcelona-Catalunya on Wednesday.

The world champion said: "I'm not feeling great. Those tyres are not particularly good. I've been pounding around doing multiple laps on long runs, which is not the most exciting.

"To get to light fuel is always an exciting feeling, but it's always new when you get back to pushing for a single lap.

"The car is in a different ballpark, not the right one at the moment, and that's what we need to work on."

And he reiterated comments he made during the first test last week that he did not like the new design of Pirelli tyres for this year.

"Generally I wish we had last year's tyres because these ones aren't as good," Hamilton said. "It was a good experience to get into the softer tyres but I have some work to do."

Hamilton achieved his childhood ambition of winning a third world title last year but said his determination to win was a strong as ever.

"You don't need to find new motivation," he said. "You use the same motivation you've used all your life."

And he said he was impatient for the season to start.

"Testing is starting to get a bit dull because it is never the most exciting part," Hamilton said. "I am ready to go racing.

"But it feels great to be back in the car. The strength in the team has grown even further and that is super-motivating for the season."

Renault's Kevin Magnussen was third fastest on the super-soft tyre, with Ferrari's Sebastian Vettel fourth on the medium.

And there was further encouragement for McLaren-Honda, who struggled badly last season. After Fernando Alonso set the third fastest time on Tuesday, team-mate Jenson Button was fifth quickest on Wednesday, with a time 0.069secs faster than the Spaniard managed.

Do Mercedes face a challenge?

It is hard to make exact predictions about form based on pre-season testing because the teams do not reveal the specification in which their cars are running.

However, there is some evidence from Wednesday's running that Ferrari might be close enough to give Mercedes a run for their money this year.

Ignoring the unknown of how much fuel the cars had on board, Hamilton's lap was comfortably quicker than Bottas's - the Briton was only 0.361 seconds slower than the Finn despite the super-soft being about 0.7secs faster.

As for Vettel, he was a second slower than Hamilton on a tyre reckoned to be about 0.8secs slower - a margin of only 0.2secs.

Vettel said: "We are on our plan. We had some days where we would like to run a bit more but in the end this is what the test is for and I think we are pretty happy where we are."

The German said he was "not concerned" about the fact Ferrari were showing worse reliability than Mercedes at this stage.

"Obviously these things you don't want to happen," he said. "But if they happen here it is not a problem; if they happen in a couple of weeks it is a bit worse."

The first race of the season is in Australia on 18-20 March.

Bottas and Magnussen set best times on super-soft tyres; Hamilton, Button, Perez and Wehrlein on soft tyre; all others on medium.