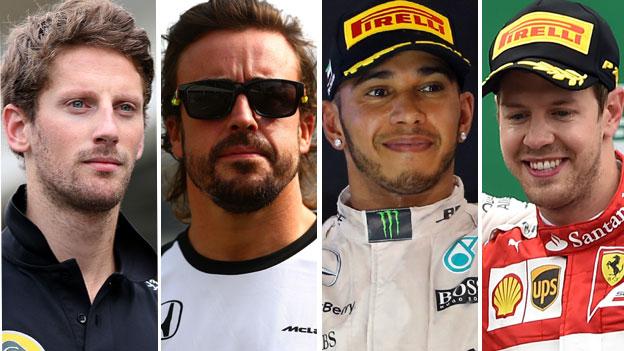 Formula 1 constructors have revealed the designs of their new cars for the 2016 campaign.

But what should we be looking out for ahead of pre-season testing? BBC Sport highlights a selection of key features.

Mercedes say that even though the car looks the same as last season's on the outside, it has a number of "mini revolutions" inside.

Expert view from Mercedes technical director Paddy Lowe: "While the car may look very similar to its predecessor from the outside, underneath there are quite a lot of mini-revolutions that make up an overall evolution for the new season."

Ferrari's new SF16-H model sees the team revert to the push-rod suspension for the first time in four years and large sections of white on its livery.

Key feature: The biggest change concerns the V6 combustion engine. The charge air cooler has been relocated from its original position between the cylinder banks.

Expert view from Ferrari driver Sebastian Vettel: "When I joined the team there were a lot of people changing their positions and it was a difficult time to have expectations.

"But now we have had a much better winter to prepare and therefore we will be a strong team - as we have seen already last year - but even stronger this year."

McLaren did not reveal what expectations they had in terms of performance after the nightmare start they had last year.

Expert view from McLaren driver Fernando Alonso: "The whole car is beautiful - it's particularly nicely packaged from an aerodynamic point of view and I'm 100% ready for the challenge ahead."

Key feature: This year, Red Bull's engine provider Renault will be assisted in its development of their engine by British company Ilmor.

Expert view from Christian Horner: "I believe it will be a transitional year. I think we are going to start the year with some progress from the end of last season, but I think with our engine partner's commitment to buying a team we will see staged progress during the course of the year."

The FW38 sports the same colours from the past two seasons and team principal Sir Frank Williams says it will be a "challenge" to retain their position in the top three teams.

Key feature: The bulge where the sidepod meets the engine's covers has grown in size which indicates a change to internal packaging.

Expert view from chief technical operator Pat Symonds: "The FW37 was a pretty effective car and so we concentrated on understanding the areas where we could improve it without losing the attributes which made it effective."

Key feature: The Haas car was designed in the Maranello wind tunnel and uses Ferrari's 2016 engine.

Expert view from Team principal Gunther Steiner: "Our methodology behind the VF-16 was to make it the best evolution of a good F1 car. We're a new team, so we looked at what the successful teams were doing to give us a baseline of the direction we needed to go with our design."

Force India revealed their VJM09 car just before pre-season testing got under way in Barcelona and development driver Alfonso Celis had the honour of getting behind the wheel first.

Force India chief operating officer Otmar Szafnauer: "The wind tunnel programme in Cologne is maturing nicely and I'm encouraged by the gains we have made over the winter. We've found our rhythm with the tunnel and adjusted our working practices to improve efficiency. The same is true of our CFD tools in Brackley, where we invested heavily in 2014, which means we are making better use of our supercomputer capacity.

"The first major aero updates should be on the car in time for Melbourne and we also plan another big step for the start of the European season."

Toro Rosso's official launch of their 2016 is pencilled in for 29 February and it took to the circuit on Monday for the first day of pre-season testing sporting plain blue livery.

The STR11's most significant change is the switch from Renault to Ferrari power units.

Renault held their official launch three weeks ago, although did not reveal their 2016 car then. Instead, that made its first appearance on Monday in the first pre-season test.

Renault racing director Frederic Vasseur: "Renault have proven in the past they can achieve and do it. Motorsport is a part of the DNA of Renault, and the motivation is more than high. We have a new challenge in front of us, and we are determined. For everybody - the drivers, the team, the engineers - the group is behind us and we have their full support."

Manor's car for 2016 - the MRT05 - broke cover in Barcelona on Monday, showing off a strong mix of red, white and blue colours.

The car features a brand-new Mercedes power unit and Manor are confident they have the ability to challenge further up the grid.

Manor technical director John McQuilliam said: "This is the best car we've ever launched. Certainly the most developed, the most ambitious and the most aggressive."