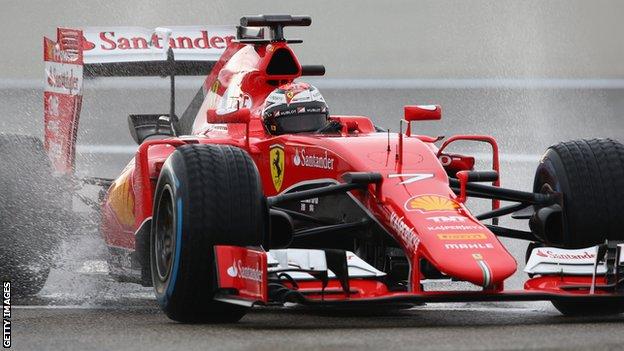 Formula 1 drivers are pushing for increased cockpit head protection and higher-performance tyres from 2017.

The Austrian, 41, added the drivers also concurred on wanting to "help and support Pirelli to construct a tyre fit for maximum-attack racing".

Drivers dislike the existing tyres as they can rarely push flat out on them.

However, they rarely speak out publicly after being warned to keep their thoughts private.

Governing body the FIA has been pursuing ways of protecting drivers' heads in open cockpits from frontal impacts for some years, but the issue has come into sharper focus following a series of deaths across motorsport.

In July last year, former Marussia driver Jules Bianchi died as a result of severe head injuries sustained in a crash at the Japanese Grand Prix 10 months earlier. Just a month later, ex-F1 driver Justin Wilson was killed after being struck by flying debris during an IndyCar race in America.

Several different ideas were tested last year and Wurz, speaking in an exclusive interview with BBC Sport, said the GPDA felt F1 was now in a position where one specific design could be adopted.

The drivers are backing a device known as the 'halo', which involves two curved arms stretching forward from the back of the cockpit and arching around to meet at the front, where a vertical strut supports the structure and provides some protection from flying debris.

"The research the FIA experts have done is very thorough and the process has brought forward a clear solution," Wurz said.

"Now the drivers feel it's time to implement the extra protection at the latest in 2017."

The idea will be discussed at a meeting of F1's technical leaders on Friday, when the FIA hopes to make progress on deciding a raft of rule changes aimed at making the cars faster and more dramatic for 2017.

Wurz said: "Obviously structural changes are required to the chassis but, with almost a one-year lead time, I don't see any technical person speaking against such substantial safety improvements, especially given the last big accidents in open-wheel racing involved head injuries.

"So all the drivers, and I, hope that passing the additional head protection will be a formality."

Why do drivers want tyres to change?

Pirelli's tyres have been controversial since the company entered F1 in 2011 with a remit to provide rubber that was fragile and promoted pit stops.

Wurz is speaking out on behalf of the drivers in an attempt to persuade F1 boss Bernie Ecclestone to change the sport's philosophy away from tyres that need managing, so drivers can once again push flat-out throughout a race.

Wurz said the GPDA had reached a unanimous agreement on what the drivers wanted from tyres.

The details of the agreement, he said, would "remain private and confidential" until drivers had a chance to discuss with Pirelli its preparations for the 2017 rules, which will impose significantly higher loads on the tyres.

But he added drivers wanted a tyre that "allows them to push and extract everything possible from these extraordinary race cars again, because that's what F1 is about, the pinnacle of motor racing which we all love".

He said: "The drivers want to underline very clearly that they would love Pirelli to produce a tyre which goes faster around corners as well as being safe.

"If we get sticky tyres, we will have happy drivers, and happy drivers means authentic and honest performance, pure message for the product and driving the cars to the maximum.

"That's what we want and, according to the fan survey we did last year, what all the fans expect."

Is it just the drivers?

Other senior figures share the drivers' concerns over tyres, particularly in the context of the planned 2017 rules.

The new regulations have already been watered down following an intervention from Pirelli.

And one senior insider has told BBC Sport there is a growing concern the purpose of the new rules will be undermined if F1 continues with the current tyre philosophy.

A senior source said: "To a man, the drivers say: 'We are driving far below our own personal limits - and those of the cars - because of the tyres. It's not fun and we don't like it.'"

The source added: "We're coming up with all these changes, but none of them are addressing the one thing that's arguably causing them.

"It's a big problem and it's annoying a lot of people."

Leading figures are planning a meeting with Pirelli in Milan early next month to discuss the issue.

Pirelli has always said it can produce any tyres F1 wants, as long as it is given a clear commission.

As to whether the demand for more 'raceable' tyres was in conflict with the GPDA's aims to improve safety, Wurz said: "We know that car and circuit safety was designed for higher speeds.

"We have seen higher cornering speeds in F1 already, back in 2009, cars went more than 30mph faster around corners.

"While we drivers want to minimise the dangers, by using modern technologies and the amazing safety know-how F1 developed over the years, drivers accept the underlying risks of racing to a certain extent.

"But first and foremost race drivers want to go fast".