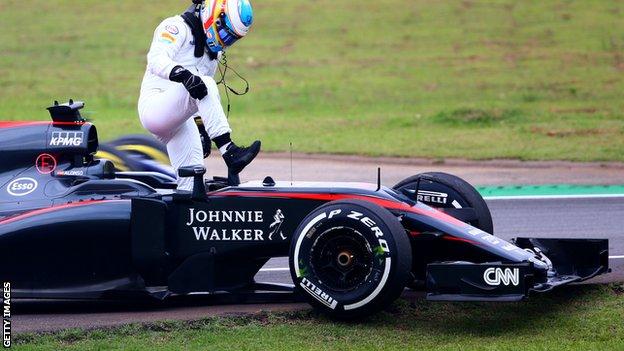 Fernando Alonso says his criticisms of McLaren's Honda engine over team radio helped focus the company on the need to make drastic changes.

He said he felt like an "amateur" when repeatedly overtaken in Canada and in Japan called the engine "embarrassing".

"The actions we need to take next year to be competitive [are] quite extreme," the two-time champion said.

McLaren's season featured a constant stream of reliability problems, grid penalties for using too many engine parts and uncompetitive performances, largely as a result of the fact Honda's engine was by far the worst in the sport.

McLaren's best results were a fifth place each for Alonso and team-mate Jenson Button.

Alonso, in an exclusive interview for the BBC F1 Review show, admitted that he "knew they could broadcast" his message in Japan, when he likened the Honda power-unit to one from the GP2 feeder formula, where engines have a third less power than in F1.

But he added: "A lot of radio messages they didn't broadcast, a lot of in-laps where we were very thankful of the team because it was very difficult.

"Sometimes they change three engines, we were taking one point, two point, close to the points. A lot of positive messages they never broadcast. In Japan, when they broadcast that, probably I knew they could broadcast it."

Button, who also made some withering remarks about the car's performance over the radio and joined Alonso in waving from the podium in Brazil after both were knocked out in the first part of qualifying, said: "Most of the stuff I've said has been useful to the team.

"Some is jokey, because I think you have to have a laugh in some situations when it is as tough as it is for us now or else you go crazy.

"Otherwise you get angry and you don't want to get angry with the team because we are all there doing the best we can and we are one team, and I don't want to let them down.

"But sometimes you have to let a bit of emotion out and that's what I've done over the last few races."

Alonso said that McLaren's performance had made it difficult for him to maintain in 2015 the high standards for which he has become famous in F1.

"I don't think it was the best of me," he said. "I had some good races but here and there not consistent enough."

He singled out his qualifying lap in Japan, which he said at the time was one of the best of his career, and his race at the US Grand Prix as his personal highlights of his season.

"In Suzuka, one of the best," Alonso said. "In Austin, it was one of the best - for the first 20 laps in the damp conditions, eight or nine of them I was quicker than Lewis (Hamilton), who was leading the race.

"But I could not keep that top level of performance consistently enough.

"Some frustration around, some disappointment sometimes. So for next year the level will be higher and I will perform as I did in the lap in Japan or the race in Austin hopefully in every race in every lap."

"So some frustration, some disappointment, so for next year the level will be higher and I will perform as I did in the lap in Japan or the race in Austin every race."

Still enjoying F1 - with a caveat

Alonso said he was still enjoying F1 but that he needed to be winning again soon.

"You need to feel a little bit competitive to enjoy, at least. When you are not quick enough it is difficult to enjoy - you get more frustration than fun.

"There are always new challenges - new circuits, some wet races, good opportunities, the starts, the first laps. They are always moments to enjoy, but at one point you need to fight for the championship. That is the ultimate goal."