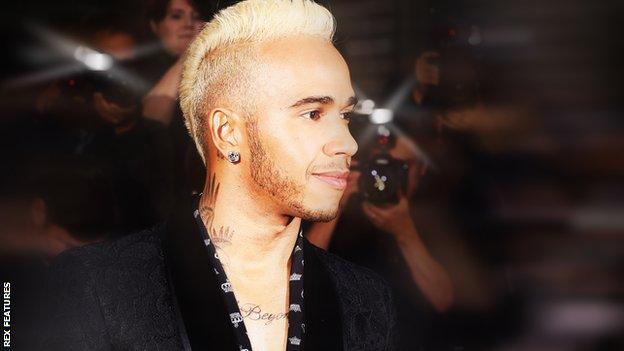 Surpassing Ayrton Senna's record in Formula 1, becoming only the second Briton to win three world championships and enjoying near dominance throughout, how could Lewis Hamilton not be a star of the season?

In many ways, Hamilton's win at the opening race of the year in Australia set the tone for the remainder of 2015, as he eased to victory ahead of his team-mate Nico Rosberg.

Nine more wins followed, the latest of those at the United States Grand Prix in October, where Hamilton cemented a second successive world title.

A Tour de Force on the circuit he may have been, but his antics off the track filled almost as many column inches throughout the year as his performances on it.

There's been the hairstyles - from corn rows to bleached blonde - to the many fashion show appearances and partying with pop stars like Rihanna.

For years, the Briton was largely focused on one thing and one thing only - winning - but this season he has thrown himself into living life to the full.

"I like taking risks, I like trying new things," Hamilton said of the hectic lifestyle he has adopted.

Paddle boarding with his dog Roscoe in Barbados one minute, on the plane to Los Angeles or some other city the next, it has certainly appeared to be an exhausting existence.

However, it's hard to argue that it has not worked out for him.

Hamilton - who also secured pole position on 11 occasions in 2015 - is the first driver to claim 10 or more victories in successive grand prix seasons.

He described this year as his strongest in Formula 1 and, at 30, he still has plenty of years left in the sport.

Worryingly for his rivals, he shows no sign of slowing down.

Who else made BBC Sport's Stars of the Season list? Find out here.