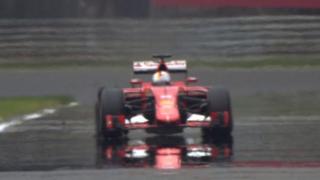 Sebastian Vettel's hopes of finishing on the podium end after he suffers a blown tyre on the penultimate lap of the Belgian Grand Prix.

The Ferrari driver was holding off the Lotus driver of Romain Grosjean on a one-stop strategy, but his gamble failed as his right-rear tyre exploded down the Kemmel straight to hand third place to the Frenchman.

Speaking after the race Vettel appeared angry at Pirelli for the tyre failure, saying "things like that are not allowed to happen".

How Mourinho has added his secret ingredient to Spurs - Jenas analysis