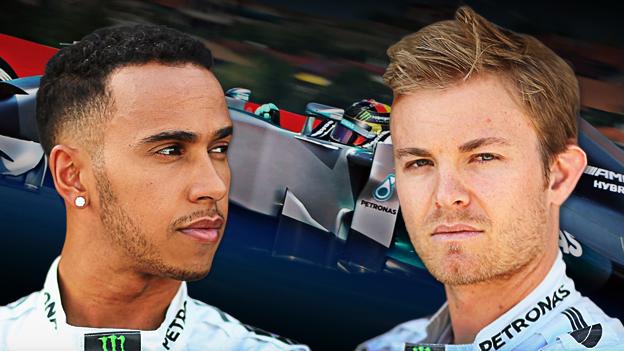 Lewis Hamilton and Nico Rosberg's fight for the 2014 title was one of the most fascinating battles in any sport.

In the end, it was Hamilton who came out on top, winning his second world championship at the season-ending Abu Dhabi Grand Prix.

It surely had the makings of the perfect partnership. Childhood friends racing for a team that expects to be challenging for the championship.

The two are involved in a thrilling duel at the Bahrain Grand Prix in April, with Hamilton coming out on top to win his second race of the year.

Rosberg, though, is not happy with the way his team-mate's victory, claiming the Englishman's move on the 18th lap was "over the line".

The German later plays down any disharmony between the team-mates, adding: "It is not the first time we've had a battle, or the first time it's been a little bit close. We have had so many, right back to 12 years old."

Hamilton adds: "It was a bit more like a go-kart race. I hope there are more races like that through the year."

The comments about each other become increasingly heated as the season wears on.

The first noticeably tetchy words come in the wake of Hamilton's win at the Spanish Grand Prix in May.

It is his fourth victory in succession and moves him to the top of the championship standings, three points ahead of Rosberg.

After the race, Hamilton says he needs to find a way to break his team-mate's mental strength.

It is a comment that appears to irk Rosberg, who retorts: "Break me down mentally? I think he will struggle with that one."

Coming to a head

Previous on-track tussles and wars of words may have been playfully batted away, but the first real sign of tension between the two comes in Monaco after Rosberg secures pole in controversial circumstances.

After clocking the fastest lap, Rosberg goes off at the Mirabeau corner. Track officials wave the caution flags to slow the cars still out on the track, denying Hamilton the chance to his improve his best time and challenge for pole. The 2008 world champion is furious.

Hamilton later tells BBC Radio 5 live: "People are always talking about friends, I can count my friends on one hand. I am sure Nico can do the same. I am not in his five and he is not in my five.

"The rest does not matter. We are here to win and here to race, we have a great amount of respect for each other, that is all we need."

What better way to patch up your differences than on social media? As Hamilton takes to Twitter to reminisce about his long-standing relationship with Rosberg.

"We've been friends a long time & as friends we have our ups and downs," Hamilton wrote on 30 May: "Today we spoke and we're cool, still friends #no problem."

The niceties do not last for long, though, as the pair go head-to-head again in Hungary. Rosberg is left furious after Hamilton refuses to follow team orders and allow him to pass.

Hamilton admits he is "very, very shocked" by the request to allow his team-mate through. He eventually takes third place, with Rosberg finishing fourth.

The German refuses to discuss the incident publicly after the race.

The mid-season break does little to alleviate any tensions between the two drivers and things come to a head in Spa when the German effectively ends Hamilton's race on only the second la of the Belgian Grand Prix.

Having locked out the front row with Rosberg on pole, Mercedes are in prime position for a one-two finish.

Those hopes are ended quickly, though, when Rosberg punctures Hamilton's left rear tyre when he hits the back of his team-mate's car at the start of lap two.

Hamilton's shock at the incident is evident when he yells over the team radio: "Nico's just hit me, he's just hit me."

After the race, the two drivers meet Mercedes officials to discuss what happened.

"We had a meeting about it and he basically said he did it on purpose," an incredulous Hamilton reveals.

"He said he could have avoided it, but he didn't want to. He basically said, 'I did it to prove a point'."

Mercedes Formula 1 boss Toto Wolff, who had thought the rivalry would remain civilised, describes the incident as a "decisive moment" for the title fight and the team.

"Lap number two of a long race, a crash between two team-mates," he says. "It is absolutely unacceptable."

After the team's post-race debrief, Wolff adds: "They agreed to disagree in a very heated discussion among ourselves, but it wasn't deliberately crashing. That is nonsense."

With the German in the spotlight after being criticised by his team for causing the collision at Spa he makes a costly mistake under pressure from Hamilton to hand his team-mate victory in Italy.

Having taken pole in qualifying, a glitch in Hamilton's start procedure sees him drop to fourth early on and Rosberg takes the lead in Monza.

The Briton battles back and looms large in the mirrors of his team-mate. Under pressure, Rosberg brakes too late into the first chicane and is forced to take to the escape road for the second time as Hamilton takes the lead and holds it to the chequered flag to reduce his deficit in the title race to 22 points.

Roseburg, who finishes second and is once again booed on the podium, is magnanimous in defeat, saying: "Lewis drove a great race and he deserves it today."

But Mercedes' motorsport director and team boss Wolff can sense the simmering tension.

He says: "It has changed from, let's say, an almost amicable relationship at the beginning of the season to a very intense moment, where it was almost like realising these two are enemies competing for the world title."

Ghost in the machine

Hamilton wins in Singapore to take a three-point lead in the drivers' championship after Rosberg retires with an electrical problem.

The German has trouble with gear selection issues from the moment he tries to leave the garage before the race.

Rosberg changes his steering wheel and has to start from the pit lane while Hamilton powers away from pole position to claim his seventh win of the season and superiority in the Mercedes rivalry.

Both drivers have now suffered two retirements as a result of mechanical failure.

A long shadow is cast over the Japanese Grand Prix as an accident involving Marussia's Jules Bianchi leaves the driver in hospital with severe head injuries.

The race result seems insignificant after Bianchi's crash, but Hamilton pulls off a tremendous overtake on Rosberg in treacherous conditions to take the lead and yet more points from his colleague.

The Briton passes the German around the outside of the fast Turn One to secure his eighth victory of the season with one of the greatest drives of his career.

"That was bravery in the extreme," said BBC F1 co-commentator Coulthard. "That is an overtake other drivers will remember."

'A slap in the face'

Hamilton starts second on the grid in the United States but once again passes his team-mate who started on pole to claim the 32nd win of his career and set a new British record.

After dominating in the previous Grand Prix in Russia, Hamilton once again underlines that he is the master on track with victory in Texas.

He uses DRS to pull alongside his Mercedes team-mate in the run down to Turn 12, on lap 24, before squeezing Rosberg wide as the pair exit the corner.

BBC F1 co-commentator Coulthard says the move is "within the rules but is a slap in the face to his team-mate".

Hamilton's 10th victory of the season gives him a 24 point lead over Rosberg with 75 available in the two remaining races.

After a season of intense battles, everything comes down to the final race of the year in Abu Dhabi...

Nico Rosberg's victory in Brazil ensured there was everything to play for in the season finale.

Hamilton goes into the race with a 17-point lead over his team-mate, who can win the title if he wins the race and Hamilton finishes third or lower.

Rosberg's hopes of doing just that are boosted as he secures pole ahead of Hamilton, who wipes that advantage out with a superb start in Sunday's race to take the lead.

Mechanical problems then end Rosberg's hopes as he drops down the field, while Hamilton cruises to victory.

The relationship between the two had been tense throughout the season, but the pair embrace after stepping out of their respective cars.

"All in all, Lewis deserved to win the championship," Rosberg says afterwards. "I came very close and it is a pity it did not work out."

Hamilton, who also won the title in 2008, adds: "It means so much more than the first one - it feels so long. I feel so blessed."