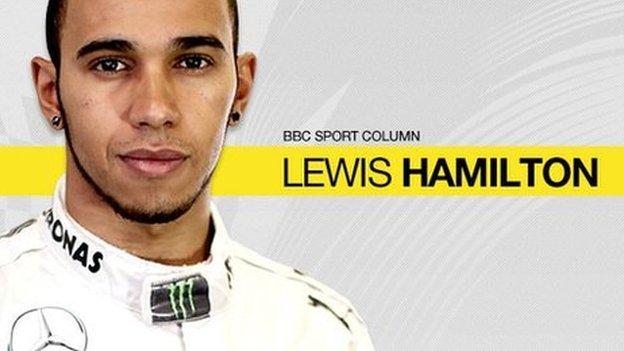 When I first started in Formula 1, I tried to ignore the fact I was the first black guy ever to race in the sport.

But, as I've got older, I've really started to appreciate the implications.

It's a pretty cool feeling to be the person to knock down a barrier - just like the Williams sisters did in tennis or Tiger Woods in golf.

I get kids from all different cultures and nationalities coming up to me now, all wanting to be F1 drivers. They feel the sport is open to everyone.

That's why it was so great to do the Top Gear festival in Barbados last weekend.

I had so much fun, although being there meant so much more to me than having a good time.

My immediate family are from the West Indies - from Trinidad and Grenada - and I have relatives all over the Caribbean.

I am the only representative of that part of the world to drive in F1, so when Top Gear told me about the event I immediately said: "I'd love to do it."

It was really cool to go there and it was so busy. Thousands turned up. I heard people flew in from Jamaica and Trinidad just to see me.

It was weird. It was almost like it was my event. In fact, Jeremy Clarkson said to the crowd at one point that "15% of the people are here to see Top Gear and 85% to see Lewis".

It was unbelievable, really one of the best weekends I've ever had... the feeling, the energy I got.

The fans were so excited - the most excited I have ever seen in my life.

I don't think they have ever seen anything like that before, never heard an F1 car anyway, so it was surreal to be the person to bring that to them and represent F1.

Cricket and football are the biggest sports in the Caribbean, but I've noticed that F1 is increasing in popularity.

The event was just a blast. I drove a Mercedes F1 car and 'raced' against rally stunt driver Ken Block. We did 'doughnuts' and everything.

While Barbados and a lot of other places in the Caribbean are beautiful, they're not wealthy.

My auntie, for example, lives in Grenada in a shack that is no more than 15ft square. That's how my dad's dad lived before he came to England.

I went to Barbados after visiting Haiti as part of my work as a Unicef ambassador. Every year, I'm trying to do more with charities.

I've been working with Unicef for a couple of years now and I signed up with Save the Children in 2013.

Haiti is a beautiful place in many respects, but poverty is a real problem.

A lot of money was raised for Haiti after the terrible earthquake in 2010 and things got a bit better there for a while, but conditions have started to deteriorate again and the child mortality rate has begun to increase.

No-one should have to live in the conditions that I saw some kids in there. They were malnourished, not eating.

We've all seen pictures of children with flies on their faces, sad and hungry, but television simply does not do justice to the tragedy of it.

When you see a two-year-old kid who doesn't have the energy to move, it's devastating. It brings tears to my eyes thinking about it now.

I want to bring as much attention to that sort of thing as I can and the film I made there will be shown as part of Soccer Aid on 8 June.

The next stage in a long battle

It's Monaco this weekend, a race I always look forward to.

I love street tracks and this is one of my favourites, although my feelings about it have changed over the years.

My win here in 2008 was one of the most significant events of my career, but this is my eighth year in F1 now and I've come to realise that there are so many other great races.

Now Monaco is my home, the race is still special but it's different.

The first few times I came here, I wanted to emulate Ayrton Senna and win, drive through the tunnel and around all those iconic corners.

I lived the dream - and still am living the dream - but the rose-tinted spectacles I once had have gone.

Maybe it's like a relationship... there is the honeymoon period, then it settles down into normality. It's still great, but it moves to a different level.

I will still get a buzz every time I climb into the car this weekend - and I still want to be on the top of that podium on Sunday - but, more than anything, I hope it's a good battle.

Those first two years I was in F1, Monaco was great, fighting with McLaren team-mate Fernando Alonso in 2007 and then the Ferraris in 2008.

Since then, very few races here have been a proper battle between teams vying for victory. Whoever has the superior car has won. For me, that has taken the passion away a little bit.

Competition is what I live for. That's why I never play mind games.

Of course, sometimes you say things without realising the implications, but I want to win on the track through pure ability. It's the way I was raised.

I certainly don't want to handicap a rival before a race. I want him to be at his best. Then, when I beat him, that's bigger than any psychological ploy.