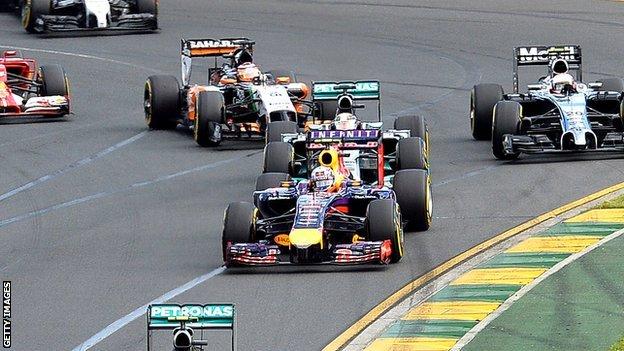 McLaren team boss Eric Boullier has defended Formula 1's new engines in the wake of complaints they have an uninspiring sound.

F1 boss Bernie Ecclestone says he was "horrified" by V6 turbo hybrids, which are much quieter than the old V8 ones.

Boullier said: "We can't dismiss it if fans complain but we also have to see some positives and not focus only on the noise."

Engines are among several F1 changes this year.

Boullier pointed out that the engines mirror the direction of the road-car industry and had been embraced by manufacturers.

Personally I like the sound of the engines, but then I love F1 and I love watching cars go round a racetrack

"This new power-unit we have developed is a completely industry-relevant engine formula and this is why we could attract some new engine manufacturers and keep some of them on board actually," he said.

Renault, one of the three companies producing the engines, threatened to quit F1 if the sport did not introduce a new formula that reflected the greater efficiency now popular in road-car power-plants.

Boullier, McLaren's racing director, added that at the first race of the season in Australia last weekend the new cars had proven more of a challenge for the drivers than last year's.

"This new formula has a very torquey engine, less aerodynamic downforce. It is more of a driver formula and you could see that this weekend; there were a lot of small mistakes.

"And even if there is a need to manage and save fuel and energy, it was still interesting to see some overtaking and it was really a challenge for the drivers.

"It's true the engine sound is different but it's not very different from the turbo sound we had in the 70s [and 80s]. It needs a little bit of time to see what is going on and how it develops."

The team bosses of Williams and Mercedes have backed his views.

Williams deputy team principal Claire Williams said: "Personally I like the sound of the engines, but then I love F1 and I love watching cars go round a racetrack.

"I think people will pretty quickly get used to what F1 engines sound like.

"We've had so many changes over so many decades of motor racing and you very quickly forget what a previous engine sounds like and I think people just want to see a good race.

"As we can deliver that then I think that any issues that perhaps... or contentious conversations around that may fade away."

Mercedes executive director (business) Toto Wolff said: "This is modern technology, this is where road cars are going.

"Downsizing is the motto and I think we just need to accept that the formula has changed.

"These cars are going to go quicker than the old ones in a couple of races, we're going to get used to the sounds and I promise next year you will not notice any difference any more."

Ecclestone, who was boss of Brabham when they became in 1983 the first team to win the F1 title with turbo engines, told the Daily Telegraph that he would like to see something done to the engines to make them "sound like racing cars".

"We can't wait all season," Ecclestone said. "It could be too late by then.

"I don't know whether it's possible but we should investigate. I think let's get the first few races out of the way and then maybe look to do something."