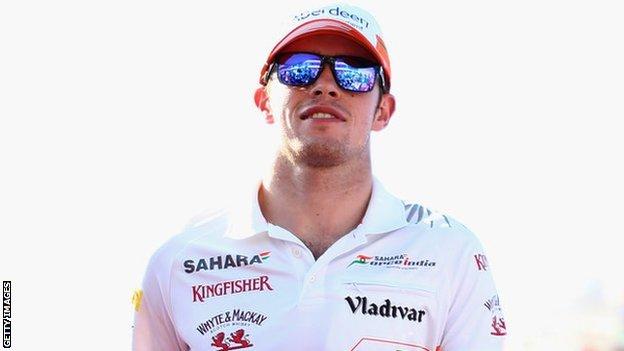 Paul Di Resta believes Formula 1 has not seen the last of him.

The 27-year-old Scot says he is sad that he is not in Australia this week preparing for F1's season-opener around Melbourne's Albert Park.

Instead, he was last week at a fitness camp preparing for a return to the DTM German Touring Car Championship.

"My desire is to be involved in Formula 1 in some way, shape or form," said Di Resta, whose three years with Force India ended last season.

"Staying as actively as you can in the sport is important and if there is any chance to get back then hopefully that can happen."

Di Resta was ousted from Force India despite what proved to be his best season with the Silverstone-based team as they hired Sergio Perez and Nico Hulkenberg.

There has been speculation about Di Resta becoming Mercedes' reserve driver this season, particularly given his decade-long association with the German manufacturer, but he insists there is "nothing yet" in that regard.

"At the moment, I'll take it year by year and I'll do what I can to get back in," said Di Resta.

"I certainly don't feel as though the door has closed on me in any way and I'm not too old to give up.

"I did enough to show people what I can do and there may be chances pop up.

"I'll continue to be as involved as I can over the next year, couple of years."

Di Resta, who won the DTM series in 2010 before moving up to F1, plans on visiting the F1 paddock when the touring car schedule allows.

"Obviously I'm sad not to be there, but I'm planning on trying to get to a few races and, when it comes back to Europe, it will be far easier," he said.

Although his F1 ambitions have not waned, Di Resta is eager to make an impression back in DTM with Mercedes, who have not won the title since his departure four years ago.

"I'm massively keen to get myself on and get racing again," said Di Resta, who will also be marrying long-term girlfriend Laura Jordan this year after proposing at Christmas.

"It will also be quite nice to get back on the podium again and win races," he said.

"Obviously it's a different challenge. I don't see it as a backward step in any way.

"It's just different racing and I'm with good people, a manufacturer I have spent 10 years with."