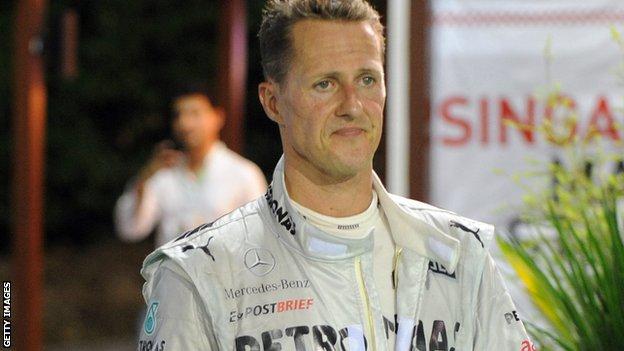 Michael Schumacher has had a corner named after him at Bahrain's circuit.

The seven-time world champion remains in a medically induced coma in a French hospital after suffering head injuries in a skiing accident in December.

The Bahrain International Circuit said the German had been involved in the track design, including that corner.

They said they had consulted 45-year-old Schumacher's family about the idea to honour him, and that it went ahead with their full support.

His manager Sabine Kehm said: "Michael's family would like to thank the Bahrain International Circuit for this gesture, acknowledging Michael's achievements in Formula 1 and interest in the BIC circuit design.

"We take it as a recognition for his passion for motorsport. I am convinced Michael will love the idea and feel very honoured about having a BIC corner named after him."

There has been no further information on Schumacher's condition since 30 January, when doctors in Grenoble said they were to start trying to bring him out of his coma.