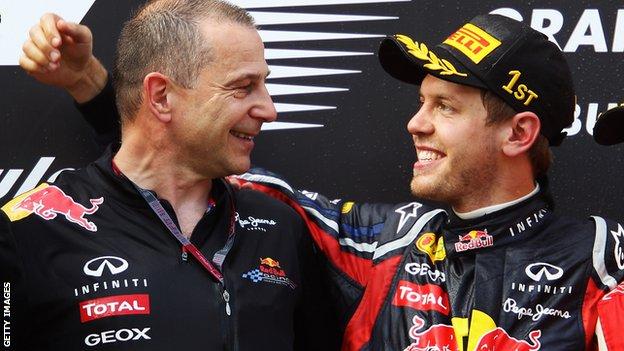 Mark Ellis and Giles Wood will join Mercedes in June 2014.

The departures are a blow to Red Bull, who now face two of chief technical officer Adrian Newey's main lieutenants leaving the team next season.

The two men are the first two key appointments of Mercedes' new leadership team of Paddy Lowe and Toto Wolff.

Lowe and Wolff will be co-team bosses of Mercedes in 2014 following the departure of team principal Ross Brawn.

Both carry the title executive director, with Lowe responsible for the sporting and technical aspects of the team and Wolff the financial and political.

The two new recruits from Red Bull represent the latest step in a process Mercedes hope will lead to them becoming the leading force in F1 after four years of Red Bull domination.

The technical leadership of the German team, who are based in Brackley in Northamptonshire, has been comprehensively reshaped in the last two years.

A Mercedes statement said the recruitment of Ellis and Wood would "further strengthen the team's technical organisation, particularly in the fields of simulation and vehicle dynamics".