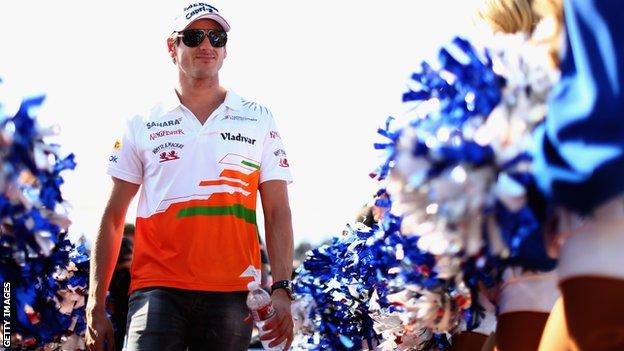 Adrian Sutil has signed to race for the Swiss Sauber team in 2014.

The German moves from Force India, who on Thursday announced Mexican Sergio Perez was joining former Sauber driver Nico Hulkenberg in their line-up.

Sutil, who will be in his eighth season in Formula 1, effectively replaces Hulkenberg as Sauber's lead driver.

He said: "Sauber has every opportunity to move forward. The factory is A1 standard, the wind tunnel one of the best."

He added: "They've proved how efficiently they can work. I've been in contact with Monisha [Kaltenborn, team principal] for a while and she always gave me the feeling my qualities are valued."

Kaltenborn said: "Adrian is not only very fast, but also brings a lot of experience, which is very important looking at the new regulations for next year."

After a poor start to 2014, Sauber ended the year on a high following an extremely impressive second half of the season, in which Hulkenberg produced some stellar drives.

The German qualified third and finished fifth in the Italian Grand Prix and fought off Fernando Alonso and Lewis Hamilton to take fourth place in Korea.

Hulkenberg ended the season 10th in the drivers' championship.

The identity of Sauber's second driver remains a mystery.

They had initially intended to use 19-year-old Russian novice Sergey Sirotkin as a result of an investment deal with companies from his home country.

But that plan was changed when they realised Sirotkin, a midfield runner in the Formula Renault 3.5 feeder series, was probably not ready for F1.

Other names mentioned in connection with the drive include Mexican Esteban Gutierrez, who raced his debut season with the team in 2013, and Russian former Renault, Lotus and Caterham driver Vitaly Petrov.