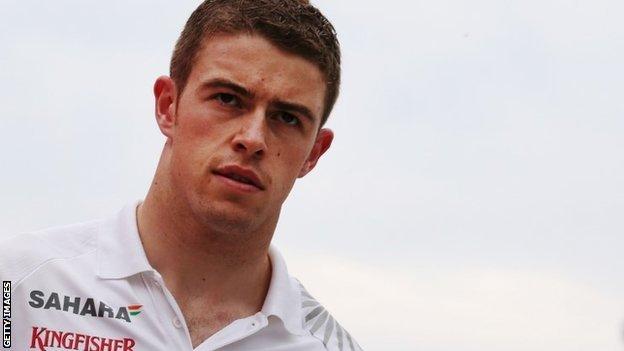 Force India announced last month that their other driver would be German Nico Hulkenberg, who re-joins the team after a season with Sauber.

Paul Di Resta's failure to find a Formula 1 drive in 2014 appears on one level to be harsh - he is certainly a better prospect than several of the men who will be on the grid next season.

The Scot has proved to be a decently quick and pretty reliable performer in his three seasons in F1, and has produced a handful of impressive drives.

But team bosses feel he lacks star quality and has failed to prove he has the potential to go on to be a world champion.

Times are hard in F1 at the moment for many teams, a majority of which are struggling to complete their budgets.

One example of this was Lotus being forced to take Pastor Maldonado and his mega-bucks Venezuelan sponsorship package rather than their preferred option Nico Hulkenberg.

In that environment, outside the 'big four' of Red Bull, Ferrari, Mercedes and McLaren, a driver has to have something extra special to make it worth taking the cash hit of employing him if he does not bring financial backing.

And there has been little evidence that Di Resta is another Sebastian Vettel or Fernando Alonso, even though he beat Vettel to the European Formula Three title when they were team-mates in 2006.

Nor has he helped himself. His image among F1 insiders is not positive, a result of some of his critical outbursts against his team on the radio, and other stories about his attitude that have done the rounds.

Friends tell of a jovial, amusing character who is fun to be around in private. But Di Resta has chosen not to show that side of himself to the world, a decision that must now be viewed as a mistake.

Although there are still some seats open in F1 next year, none are believed to be available to Di Resta.

The 27-year-old is expected to switch to touring cars or endurance racing.

Di Resta is most likely to return to drive for Mercedes in the German Touring Car Championship, which he won in 2010. Sources say he is tired of F1, feels he is finished with it and, as things stand, is unlikely to try to find a reserve driver role to keep his foot in the door.

The Briton made his debut for Force India in 2011 but after three seasons the team have decided they would be better to choose different drivers.

Hulkenberg overshadowed Di Resta when they were team-mates in the second half of 2012 and has continued to impress for Sauber this season.

Perez, who has been dropped by McLaren after a season alongside Jenson Button, brings with him several million pounds worth of sponsorship from Mexico.

Perez said: "Coming here [to Force India] was always my first choice and I'm really happy everything has now been confirmed.

"This is a young team with a lot of determination and they've produced competitive cars for the last few years.

"It's all change for next season with the new regulations, but I already have a good feeling about 2014."

Di Resta was overlooked by top teams Red Bull, Ferrari and McLaren when they all changed their second drivers ahead of 2014.

And his ability to find a seat elsewhere has been harmed by his lack of sponsorship budget.

Team bosses feel that he has not proved to be outstanding enough in his three seasons for it to be worth them taking the financial hit of signing him.

Sauber have not yet announced their line-up but there is understood to be no place for Di Resta at the Swiss team.

They are expected to sign his former Force India team-mate Adrian Sutil as their lead driver. Their second seat is likely to go to either Mexican Esteban Gutierrez, who made his debut for Sauber in 2013, or a Russian in deference to their new business partners.

That could be former Lotus and Caterham driver Vitaly Petrov or the 19-year-old novice Sergey Sirotkin, who is considered more likely to become Sauber's reserve driver as a result of his lack of experience.

Backmarker teams Caterham and Marussia have seats available, but Di Resta is not in the frame for them.

Marussia have already signed Frenchman Jules Bianchi for a second season and are expected to keep hold of his 2013 team-mate Englishman Max Chilton as well.

Caterham's line-up is still up in the air, with 2013 race drivers Giedo van der Garde and Charles Pic still options, along with GP2 driver Marcus Ericsson of Sweden, ex-McLaren, Renault and Caterham racer Heikki Kovalainanen and a number of others.