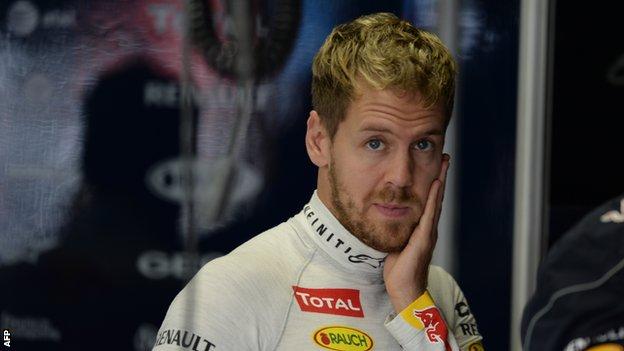 Formula 1 world champion Sebastian Vettel has criticised plans to award double points for the final race of the season from 2014.

"This is absurd and punishes those who have worked hard for a whole season," said the 26-year-old, who won the final nine races in 2013.

Does the final race matter?

If the new system had been in place for the last two decades, three world titles would have been won by a driver other than that year's eventual world champion.

In 2012, Fernando Alonso would have beaten Sebastian Vettel; in 2008, Felipe Massa would have denied Lewis Hamilton; and in 2003 Kimi Raikkonen would have edged out Michael Schumacher.

"Drivers, fans and experts are horrified."

Other teams and drivers are yet to comment on the plans following a meeting of the F1 Strategy Group and the Formula One Commission in Paris on Monday.

Red Bull driver Vettel would have lost the 2012 title to Fernando Alonso if such rules had been in place and is far from happy.

"I value the old traditions in Formula 1 and do not understand this new rule," he told German newspaper Sport Bild. "Imagine, in the last Bundesliga [football] match of the season there was suddenly double points."

Other proposals include a budget cap from 2015 and allowing drivers to choose their own racing number - from two to 99 - for their entire F1 racing career.

Previous suggestions by the sport's boss Bernie Ecclestone to improve F1's spectacle have included a medal award system for drivers and artificial rain, to spice up the on-track action.