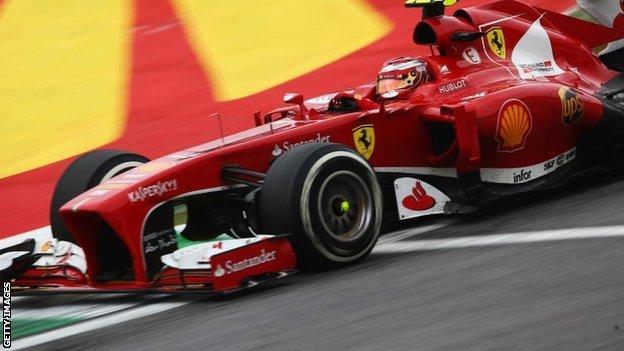 Ferrari can dominate Formula 1 again in the near future, according to new technical director James Allison.

Ferrari won five consecutive titles in the early 2000s but have failed to match Red Bull in the last few seasons.

"I have found a team hungry and determined to get back to the top of the podium at every race and championship," said Allison.

"It is a team that is optimistic for the future and is looking forward to dominating the sport again."

Ferrari driver Fernando Alonso has finished second to Red Bull's Sebastian Vettel in three of the last four years, seasons which have been characterised by Ferrari's inability to build a car as fast as the Red Bull.

Allison, who was talking to Sky Italia, said Ferrari's form would improve as a result of "a series of investments made on the engineer, personnel and equipment side which we are going to reap the rewards of over the next several years".

Ferrari have spent this year refurbishing the wind tunnel at their Maranello base after discovering in 2012 that there were inconsistencies between the results from simulations and those of new parts when they reached the track.

That means the 2014 car has been largely developed in the former Toyota F1 wind tunnel in Cologne, which Ferrari have been using instead.

Now their own wind tunnel is up and running again, the team are hopeful that it will improve their ability to develop their car, a major flaw of Ferrari's over the last few years.

Ferrari in the last six seasons

Allison, who joined Ferrari in September, said: "F1 is not a quick-fix sport. It is an incredibly difficult organisation to get every single aspect right, and you need every aspect right to win a world championship.

"I don't think we have made any secret of the fact the area we have been underperforming in, relative to the completion, is we haven't made as much out of the aerodynamic rules over the last few seasons as some of our rivals.

"That's for a number of reasons and it's an area where our team has invested heavily over the last 18 months or so and we will eventually get our reward for."

Allison worked at Ferrari through their dominant era with Michael Schumacher in the early 2000s before moving back to the UK to work for Renault, where he won two titles with Alonso in 2005 and 2006, ending Ferrari's run of success.

In recent years, his reputation as one of the foremost aerodynamic engineers in F1 has grown as his group at the team now re-named Lotus has produced a series of competitive cars on much smaller budgets than Red Bull, Ferrari, McLaren and Mercedes.

However, he said the extent of the rule changes for next season - which will see major changes to the chassis regulations and the introduction of new turbo-charged engines - meant it was impossible to predict Ferrari's competitiveness in 2014.

"I'm never happy because I'm always terrified. I find it much easier to work effectively when I'm scared we're not going enough, than happy that we are," he said. "(I'm) always scared, especially in a year with so many changes.

"2014 is a very big project and it's something that started well over two years ago, so that work was well under way when I arrived and is continuing extremely fiercely at the moment in the factory."

Between 1999 and 2008, Ferrari won seven constructors' titles and six drivers' championships, but have not added to their tally of 16 team and 15 driver titles since.