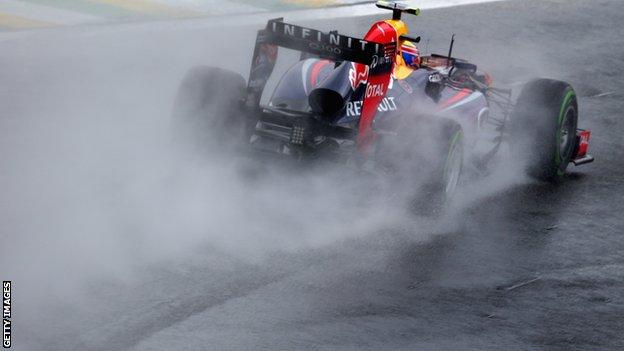 He headed Lotus's Romain Grosjean and Heikki Kovalainen and Williams's Valtteri Bottas after exploiting a brief window of the driest conditions.

Teams limited running to save tyres for the race, which could be hit by rain.

Teams are limited to three sets of 'extreme wet' tyres and four with a shallower 'intermediate' tread over a weekend and they want the tyres to be in as good condition as possible for qualifying and the race.

Mercedes driver Lewis Hamilton was fastest in the wetter, earlier part of the session on full wet tyres with a lap that was two seconds slower than Webber would manage after the rain in Sao Paulo briefly eased.

But it was impossible to know whether he was more competitive than he had been in setting fifth fastest time, 0.8secs off Rosberg, on Friday afternoon as few other drivers were out at the same time.

So keen were the teams to save tyres that with 10 minutes to go in the hour-long session only 12 of the 22 drivers had even set a lap time.

Sauber's Nico Hulkenberg was fifth, ahead of Toro Rosso's Jean-Eric Vergne, and the second Sauber of Esteban Gutierrez.

Williams's Pastor Maldonado was eighth, ahead of the Force Indias of Paul Di Resta and Adrian Sutil.

Qualifying starts at 1600 GMT, with live coverage starting on BBC One at 1500.