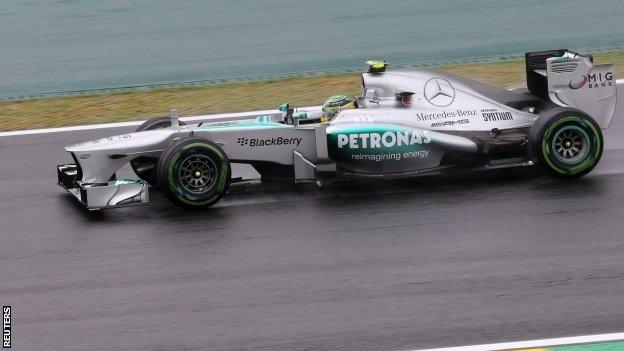 Lewis Hamilton says he has "no hope" of a good result if there is wet weather at the Brazilian Grand Prix.

The Mercedes driver was fifth in wet Friday practice but nearly a second slower than team-mate Nico Rosberg, who was fastest.

Rain is forecast for the weekend and Hamilton said: "Through my career, in the rain was always best for me; that was when I could make a difference.

The 2008 world champion, who at one point spun on the slippery track, said that he was finding it difficult to adapt to the Mercedes car in wet conditions.

"We're just really, really struggling with the throttle mapping and all these kinds of things, but clearly the car's quick enough because Nico's able to do it, so I really have to just work hard and figure out what it is," he said.

"I'm struggling just to keep it on the track for some reason.

"Same in Australia [at the start of the season], and I can't remember where else it's been raining, but it's always been the same."

British driver Hamilton was classified behind Red Bull's Sebastian Vettel and Mark Webber and Lotus's Heikki Kovalainen in second practice in Brazil on Friday and was second fastest to Rosberg in the similarly wet first session.

The 28-year-old took pole position the last time there was a wet F1 qualifying session, in Belgium at the end of August.

But that was down to doing the very last lap of the session on a drying track that was getting faster all the time.

Hamilton has complained all season that he has been struggling to get the Mercedes car exactly to his liking, and in the wet the problems are exacerbated.

He wrote in his BBC Sport column on Friday: "I haven't managed to get the car to feel the way I like very often. I can get 85% of the way there, but that really limits what you can achieve.

"I never expected that; it's not something I'd struggled with before very often. But the cars are a bit more complex now and it makes it tricky.

"But you can't dwell on that sort of thing. You just have to learn from it and try to move forward."

The weather in Sao Paulo is notoriously unpredictable and forecasts suggest a wet qualifying session and uncertainty over whether the race on Sunday will be held in dry or wet conditions.