The German, 26, drove a perfect race to secure his sixth consecutive victory this season and become only the fourth man in history to win four titles.

"I'm speechless," said Vettel. "I don't know what to say, I crossed the line and I was just empty. You want to think of something to say and I just can't. It has been an amazing season, the spirit in the team is great and it is a pleasure to jump in the car and drive."

The win was Vettel's sixth in succession and 10th in total in an incredible year that could yet see him match Schumacher's record of 13 wins in a single season.

Despite his impressive form, Vettel has not always been popular. Wins in Belgium, Canada and Singapore were greeted by boos, which he also received following his retirement from the lead in the British Grand Prix, and Vettel revealed on the podium in India how he had been affected by the abuse he had received.

"It has not been an easy season," he said. "From the outside people will think it was easy but it wasn't.

"It has been hard for me in particular. To be booed when I have not done anything wrong was hard, but I think I answered it on the track, which I am very pleased about."

Should Vettel win the three remaining races in Abu Dhabi, the United States, and Brazil, he will also equal Alberto Ascari's run of nine consecutive grand prix wins, achieved in 1952 and 1953.

He is six years younger than Schumacher was when he became a four-time champion in 2001 and will no doubt fancy his chances of eclipsing his compatriot's record of seven world titles in the coming years.

But the implementation of new regulations for 2014 onwards - which include new engine formula and the introduction of more powerful energy recovery systems - could see next season's Formula 1 championship become more competitive. 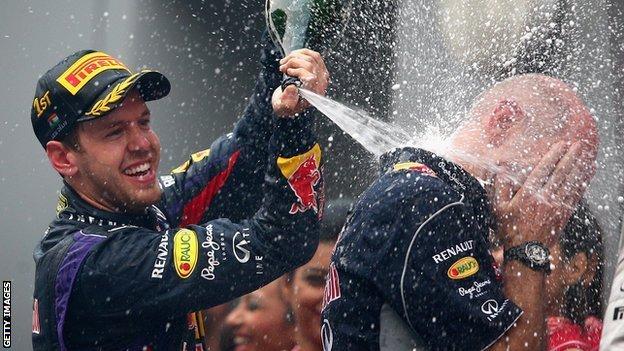 Such has been Vettel's dominance that he arrived in India needing only a fifth-place finish to be sure of the title, no matter what his only remaining rival Fernando Alonso did. The Spaniard had to finish in the top two to have any chance of taking the championship to the next race in Abu Dhabi next weekend.

But those hopes were over by the first corner, when Alonso was clipped by Vettel's team-mate Mark Webber, who was knocked sideways by Kimi Raikkonen's Lotus.

The touch damaged Alonso's front wing, and he had to stop for a new one on lap two, wrecking Ferrari's strategy of starting on the harder 'medium' tyre and running a long first stint. He fought back to 11th place.

Webber was on the same strategy, while Vettel was among those who chose to start on the 'soft' tyre and make an early pit stop.

The German did so on lap two, rejoining in 17th place, leaving him needing to carve quickly through the field to ensure he could race for victory with Webber.

Vettel did so brilliantly, moving up to third place by lap 13, and second behind Webber by lap 21, by which time he was 11.8secs behind the Australian.

Webber made his first pit stop on 28, and surprisingly Red Bull fitted the 'soft' tyres for a short middle stint, rather than saving them to the end of the race when Vettel used a similar strategy in China.

It was not the absolutely ideal strategy but it made no difference. Webber had already lost the race by then thanks to his poor first lap and Vettel's impressive drive back through the field.

Vettel made his second pit stop, for another set of mediums on lap 31, and Webber was in the next time around, rejoining 13 seconds behind Vettel.

The race for victory was already effectively over, and it was decided for good when Webber pulled off on lap 39 with an alternator failure.

Asked about Red Bull's decision to fit soft tyres at his first stop, Webber said: "You have to protect against the safety car. It's a bit nicer to put the primes on and save the options to the end, but it gets a bit smelly if there is a safety car."

That is a reference to the requirement to use both types of tyres during the race and that if Webber had still been on mediums had a safety car period happened in the second half of the race he would have been at a strategic disadvantage and lost a lot of positions.

Vettel celebrated by doing 'doughnut' spins on the pit straight, before bowing to his car and abandoning it there against protocol. He was subsequently reprimanded and Red Bull fined £21,300 for not going straight to parc ferme.

Mercedes driver Nico Rosberg took second place, ahead of the Lotus driver Romain Grosjean, who did a one-stop race, running way beyond the maximum amounts of laps recommended by Pirelli before the race.

These were 35 laps on the medium, while Grosjean ran 46.

The Frenchman caught his team-mate Kimi Raikkonen with four laps to go, and passed his team-mate at Turn Four but had to give up the place again because he completed the move by running off the track.

Raikkonen then let him by between the final two corners after being told to let Grosjean by. The Finn, struggling to get his tyres to the end after stopping on lap seven, was then immediately demoted to fifth place by Ferrari's Felipe Massa.

Raikkonen lost two further places to McLaren's Sergio Perez and Mercedes' Lewis Hamilton, the Englishman also being passed by Perez in the same move, before the Lotus driver finally had to give up on his tyres and make a late pit stop.

Perez finished fifth ahead of Hamilton in by far his best performance for McLaren, and one that may secure his future at the team next season.

Raikkonen rejoined from his pit stop to take seventh ahead of Force India driver Paul Di Resta, whose team-mate Adrian Sutil fought off Toro Rosso's Daniel Ricciardo and Alonso in the closing laps.