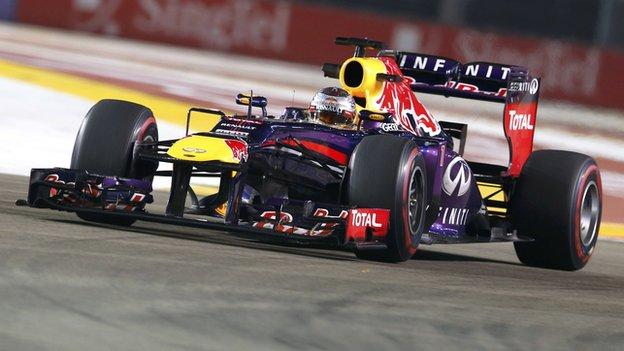 Mercedes' Lewis Hamilton was fifth ahead of Ferrari's Fernando Alonso, who was a second off the pace.

Sergio Perez, whose future at McLaren is in doubt, was seventh, two places ahead of team-mate Jenson Button. They were split by Sauber's Nico Hulkenberg.

Vettel remains a strong favourite for pole and victory, but his margin over Grosjean was smaller than expected and Red Bull may yet face some form of challenge from Hamilton.

The Mercedes driver ended the session 0.748secs behind Vettel, but did not get a clean lap on the super-soft tyres on which everyone will set their fastest qualifying times because of traffic.

Hamilton was third fastest behind Webber and Vettel on the harder 'medium' tyre earlier in the session, and more than half a second clear of Rosberg.

Webber has been faster than Vettel on the 'medium' tyre all weekend but the German has been on top when the drivers switched to the super-softs.

The Australian was 0.733secs slower than his team-mate on the fastest tyre but 0.079secs quicker on the harder.

Alonso appears to have little chance of clawing back some of his 53-point deficit to Vettel in the championship as the Ferrari has lacked pace all weekend despite a raft of upgrades.

The team have introduced new front and rear wings and a new diffuser in an attempt to close the performance gap to Red Bull but they appear to have made little difference.

Alonso committed to running the new front wing on Saturday after comparing it repeatedly with the old one during Friday practice but ended the session 1.084secs adrift of Vettel.

Alonso was actually faster than Grosjean in the first sector of his lap, but lost three-quarters of a second in the middle part and a further couple of tenths in the last sector.

The Ferrari has appeared to lack grip all weekend, with Alonso and team-mate Felipe Massa - who was a second slower in 10th place - fighting with a loose rear end on the demanding Marina Bay street circuit.