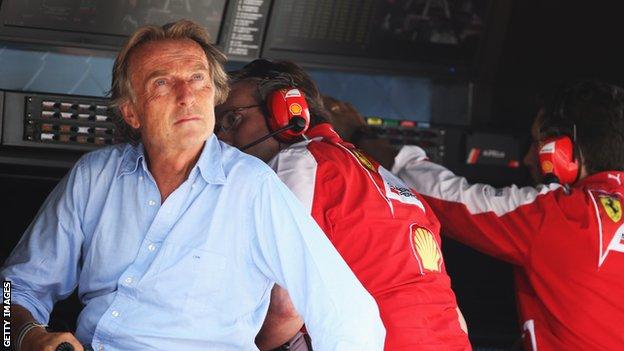 He said Massa was an "exceptional guy and a wonderful person", but added: "In 2012, we felt the lack of his points in the constructors' [championship]."

And Fernando Alonso was kept informed about the choice of new team-mate Kimi Raikkonen, according to the Italian.

"Alonso is the first to be happy that he is coming here," he said.

The 33-year-old won the world title with Ferrari in 2007 but was displaced by the arrival of Spaniard Alonso in 2010.

Di Montezemolo, who took the decision to replace Brazilian Massa with Raikkonen following the Italian Grand Prix, said: "The relationship [with Felipe] was clear. He needed results and so did we.

"He did get some, but he was inconsistent, having some good races but not on a regular basis. It will be good for him to have a change of scenery."

It is not clear where 32-year-old Massa's future lies, but he is being linked with the 2014 Lotus seat vacated by Raikkonen.

Ferrari's decision to partner Alonso, 32, with the Finn signals a return to the policy last employed between 2007 and 2009, when Raikkonen and Massa competed on equal terms.

Either side of that period, with Michael Schumacher from 1996-2006 and then with Alonso for the past four years, there has been a clear number one driver.

Speaking about suggestions Alonso was not informed of Raikkonen's arrival, Di Montezemolo added in Gazzetta dello Sport: "We are not masochistic enough to take on a driver without informing Alonso.

"Fernando was always in the picture regarding the choice, taken partly because employing a youngster, in what will be a complex 2014 season, did not inspire confidence.

"In a nutshell, I wanted a driver who would not make me regret Massa [leaving]. What I ask of Raikkonen is wins, a consistent performance level and podiums and Alonso will be the first to benefit."