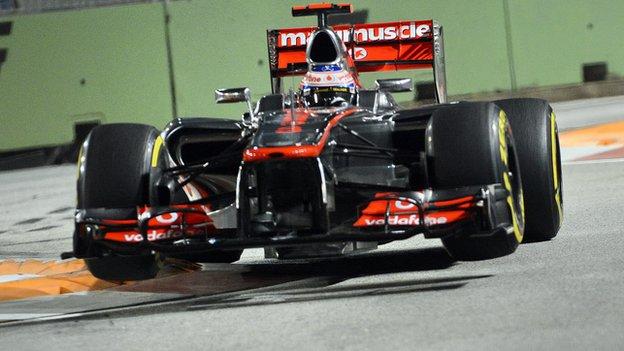 Glance at the circuit map for the Singapore Grand Prix and you would be forgiven for thinking it is a boring stop-start track with a load of samey 90-degree corners. But you would be wrong.

The corners are not what they seem - many of them are really nice and sweeping. It's a really good drivers' track - a real challenge.

The fact that it's a night race adds a whole different dimension. The lighting is really good but there is no doubt it changes the drivers' eye perspective.

Everything looks that little bit different. It all suddenly becomes glitzy and glamorous.

The colours of the cars stand out to those of us watching, and to the drivers as well. Visual definition is improved greatly for them.

Some drivers go particularly well at Singapore - and the three that spring to mind immediately are Fernando Alonso, Lewis Hamilton and Sebastian Vettel.

Obviously, they are absolutely at the top of the sport, but I suspect that, if you looked into it, this would also have something to do with driving at night and eyesight.

Some drivers will react differently to the glare of the lights, and the reflections of the other cars. And I'm sure that's where you see a slight difference in the drivers' abilities to use the limits of a given track.

Everyone's eyesight is different and drivers respond differently to that. Different light levels affect people's perceptions of space, meaning some people will leave bigger gaps at night than they would during the day.

And I'm sure Alonso, Vettel and Hamilton are strong in that area as well as being world-class drivers.

I saw this with Rubens Barrichello back in the Jordan days when we were testing at Paul Ricard in the south of France.

The session was due to finish at 6pm, but the sun was going down and he came into the pits at 5.30pm saying he couldn't see the fast corner at the end of the long straight.

Meanwhile, Karl Wendlinger in the Sauber kept going until 6pm. It was so dark you could hardly see the car but he was still doing competitive lap times. That's all down to a difference in eyesight.

From a championship perspective, it's unfortunate that Singapore is a good track for Red Bull and Vettel, who leads Alonso by 53 points heading into the weekend.

The Red Bull has great rear downforce and traction, partly because of the way it uses the exhaust gases for aerodynamic effect. Red Bull, I believe, do this more effectively than any other team - as they have since 2010.

The way Vettel drives works perfectly with this. He brakes into the corner, getting the car turning sharply by rotating it around the inside front wheel, and then gets on the throttle early, using the downforce created by the exhausts to stop the rear sliding too much.

This also helps him get off the corner like a rocket - one of the strengths of the Red Bull.

A car also needs good front-end grip to work well at Singapore. There are a lot of medium-speed corners with walls on the outside, so the last thing you need is understeer - a lack of front-end grip - because you can't run wide. The driver needs to be able to be precise

That makes the track a bit of a compromise because if you have good front-end bite it is not always easy to have good traction as well.

Red Bull don't have the best front end out there, but the quality of the exhaust system and Vettel's driving style make up for that.

I also expect the track to suit Ferrari, if not to the same extent, and I expect Mercedes to bounce back to the front after two poor races in Belgium and Italy.

They seemed to get lost on the lower-downforce tracks of Spa and Monza but Singapore should be back in their sort of range, so I expect Hamilton to be a serious contender for pole position again.

Singapore is the first of the last batch of tracks, all of which are run at more or less the same downforce levels, so we will see the last big upgrade packages for the cars.

Will Kimi Raikkonen and Ferrari ever be the perfect pairing?

Chief F1 writer Andrew Benson: "Ferrari have historically preferred dynamic, forceful characters who stamp their authority on the team. Raikkonen is low-wattage. Simplistically, he just wants to drive as fast as he can, tell the engineers what he thinks and then leave."

Last year, this is what turned the championship in Vettel's favour. He was a long way behind Alonso, but a very effective upgrade led to him winning the next four races in a row.

It will be interesting to see who has reacted in what way this year. Can Ferrari get that extra bit out of the car they need? Is Alonso annoyed because Kimi Raikkonen is joining Ferrari and what effect will that have?

It's hot and humid in Singapore, but cooling is not as big an issue as you might imagine, simply because the race is run at night.

The night-time scheduling also means little detail changes for the teams, such as altering how the lights on the dashboard work.

But these are the same for everyone and now it's the sixth year of the race, all the teams know what to expect.

There is one novelty this year - the chicane at Turn 10 has gone, to be replaced by a proper corner.

That chicane was hopeless. It was really clumsy, with big kerbs that launched the cars and caused crashes.

I spoke to the FIA about that a couple of years ago. They thought they needed the kerbs to slow the cars down so any crash would be less serious.

But they couldn't see that if they did away with chicane they wouldn't crash in the first place. So it's good to see that finally they've changed it.

There is an added benefit to the change, too. It makes the next bit, the right-left at Turn 11-12, more interesting. They are sweepers, and the cars will be carrying a lot more speed through there now so it gets a lot more demanding.

It also means Turn 13 will become a much better overtaking opportunity.

There will be a chance for a big braking job if a driver can hang on to somebody out of Turn Nine and follow them through 10-11-12. It'll add a bit of spice to a track that was already very good.

Gary Anderson is the former technical director of the Jordan, Stewart and Jaguar teams. He was talking to BBC Sport's Andrew Benson.