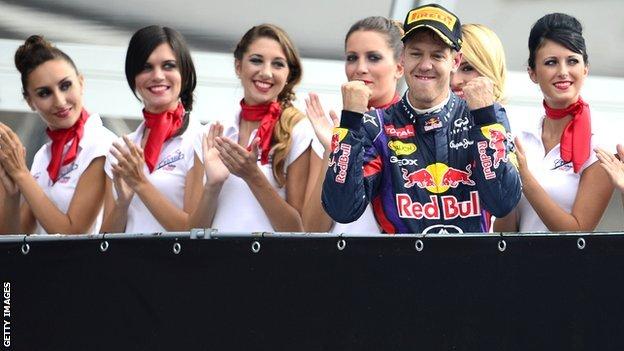 Sebastian Vettel does not deserve the boos he is now getting consistently on podiums after grands prix - and which he received again after his win in the Italian Grand Prix on Sunday.

Love him or hate him - that's an individual's choice. But the guy deserves respect for what he has done. Nobody wins three world championships just by luck.

After winning on Sunday, Vettel is now on the brink of a fourth title and his Red Bull team appear to be getting stronger as the season goes on.

This is the fifth year of this set of regulations and, other than being caught out by not spotting the controversial 'double diffuser' that helped Brawn to the world title in 2009, Red Bull have had the best car throughout.

I believe Mercedes' performance earlier this year woke up Red Bull's design chief Adrian Newey and made him realise that they needed to get on and continue to look for improvements.

Red Bull have been playing with small details on the car and it has been making all the difference in pulling out that little bit more performance.

Vettel has become the first driver to win two consecutive races this year with his victories in Belgium and Italy and that has coincided with a slight change in approach from Red Bull.

In the past, they have gone for ultimate lap time and compromised speed on the straights to get it.

This year, in response to the possibility of being out-qualified by Mercedes, they have realised the car needs to be faster on the straights on low-downforce tracks such as Spa and Monza so they can overtake if they need to. They have the car with less downforce and longer gears - and they have found that it can still produce the lap time.

Whether that will turn into the same sort of domination in the next seven races is always difficult to say. But part of what we have seen in the last two grands prix is Mercedes dropping the ball as well.

Lewis Hamilton was on pole in Spa, but that was partly the luck of the draw. And in Monza, they were never that competitive and the car never looked comfortable.

So, yes, Red Bull have been very fast, but they have looked more so because some of their main rivals have slipped back a little.

For three years now Ferrari have tried to gain an advantage in qualifying at Monza by getting Fernando Alonso to run in Felipe Massa's slipstream and yet again I think it failed, although they say it didn't.

They are obviously trying to make up for a pace deficit in the car. Monza was not the wrong place to try it, but they did it in the wrong way.

It was a valiant effort to do something, but done badly - like most of the stuff Ferrari are doing at the moment.

If you have team-mates willing to do that, you can't do it when they're both on qualifying laps.

They have to be far enough apart through the final corner Parabolica - say 350m or so - so as not to disrupt the airflow over the car behind and make the lead driver lift off the throttle just at the exit of that corner so the driver behind can pick up the tow.

Getting all that right is very difficult.

Ferrari's strategy in the race was confusing, too.

When Sebastian Vettel pitted, they left Alonso out and brought Felipe Massa in for his pit stop, when they should have left Massa out.

Leaving Alonso out cost him a second a lap for four laps - and he lost the race by five seconds while Vettel was nursing a gearbox problem.

Had they left Massa out, Vettel would have returned to the track about 12 seconds behind him. That would not have taken long to close down with Vettel on new tyres and Massa on old, so in a few laps Vettel would have been trying to pass the Ferrari.

You don't have to hold him up, but you can make it difficult for a couple of laps.

They're not seeing the big picture and it's been going on for four years now. So they need to do something about that.

Ferrari's Fernando Alonso says he has not given up hope of winning the World Championship this year but he will need Sebastian Vettel to run into problems.

The Spaniard finished second to his Red Bull rival in Sunday's Italian Grand Prix and is 53 points behind in the F1 title standings with seven races left.

He said: "We need to be realistic now there's a very big gap.

"We don't have enough races or probably the speed to win some consecutive races and reduce the gap by just pace."

The difficulties Ferrari are having with their car and with the way they operate the team are what is causing Fernando Alonso to stir things up a bit there.

He is a man who carries the credentials of being as good as anybody out there and he is a different character from last year.

He had a spring in his step in 2012; this year his shoulders are down - and everyone has picked up the critical radio message he gave during qualifying.

Unlike last year, Ferrari started this season with a car that was quick enough to challenge at the front, but it has dwindled away from them.

Its no disgrace - they are second in the championship - but this was supposed to be the year for Alonso to nobble Vettel and it's not going to happen for him because the team is falling apart. They are not doing the development they need on the car and they don't seem to be on top of things operationally either.

Alonso is desperate and he is trying a different route. It's good cop-bad cop.

Alonso is very political and he will have a focus on how he tries to motivate the team.

Last year he was all positive and supportive, he led the championship but it didn't quite work; this year he has decided to kick them where it hurts whenever he can in an attempt to get a response out of them that way.

But that can cause problems at Ferrari, with president Luca Di Montezemolo being the way he is and all the politics of the situation.

Who knows whether this will cloud Ferrari's decision as they finalise their driver line-up this week. If it was me, I'd go for Nico Hulkenberg without a doubt.

He is quick. Give him an opportunity and he will take it with open arms. Drop him in a position in a race where he shouldn't be and he'll stay there - like he did on Sunday; like he did in Brazil last year in the Force India.

I just think Hulkenberg is a great talent. He is the future, whereas Kimi Raikkonen is good for today but maybe not tomorrow.

A BOOST FOR SAUBER

Hulkenberg's performance at the weekend came at exactly the right time for him given the Ferrari situation.

He did an excellent job to qualify the Sauber third and he got the absolute best he could out of it by hanging in there and finishing fifth - with only the Red Bulls and Ferraris ahead. That was a great drive.

Sauber were quite open in admitting they did not know where it had come from.

The car obviously has an aerodynamic characteristic problem when it's running in a high-downforce set-up - which they are going to have to return to at the next race in Singapore.

An F1 car's aerodynamic characteristics change depending on how much downforce a team is trying to create - a rear wing producing a large amount of load affects how the whole car responds aerodynamically.

So they should go back to the factory, map the aerodynamics of the car in the wind tunnel with its low-downforce set-up and compare those with the high-downforce characteristics, and then change them to make them match.

Lewis Hamilton is a fantastic racing driver but his biggest problem is that he is up and down like a yo-yo over a weekend, as we saw again with his reaction on television after qualifying and the race.

If it's all motoring along nicely and the dog's happy and so on, he's all upbeat.

But I don't think the team know which guy is going to appear at the track on a Thursday.

Compare that with Vettel. I'm sure every Thursday when he walks into the paddock he is the same bloke.

Hamilton needs to become a man who can separate work and home life much more effectively.

Look at how robust Michael Schumacher was throughout his career, just fending off all that stuff. That's how you need to be. The rest of the stuff on the outside doesn't matter.

In my opinion, Hamilton doesn't bring that to the party.

Gary Anderson is the former technical director of Jordan, Stewart and Jaguar. He was talking to BBC Sport's Andrew Benson.