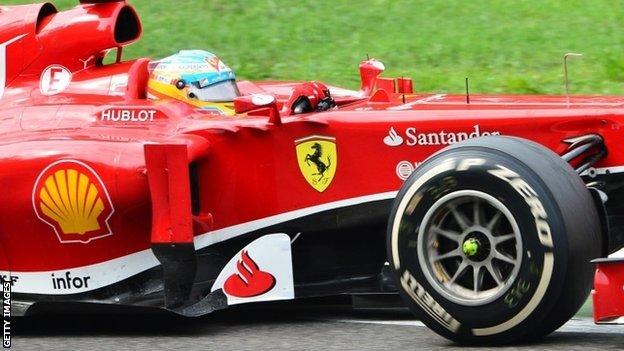 Ferrari's Fernando Alonso says he has not given up hope of winning the World Championship this year but he will need Sebastian Vettel to run into problems.

The Spaniard finished second to his Red Bull rival in Sunday's Italian Grand Prix and is 53 points behind in the F1 title standings with seven races left.

He said: "We need to be realistic now there's a very big gap.

"We don't have enough races or probably the speed to win some consecutive races and reduce the gap by just pace."

Vettel's win was his sixth of the season - making him the first man to win two in a row. Alonso is one of only two other drivers to win two races and his last victory was in Spain in May, seven races ago.

Last season, Vettel closed a 39-point deficit to Alonso after the Italian race by winning the next four grands prix but, just as this season, the Red Bull was a faster car than the Ferrari.

There are a maximum of 175 points still to compete for in the championship but Alonso has to try to close the gap in an inferior car.

The 32-year-old said: "We need to be lucky and we need to have some DNFs [retirements] from Sebastian or something to win the championship.

"With the races left and the points disadvantage, it's hard but, in a way, it was exactly the same last year.

"We could only lose the championship, with 39 points advantage in front of Sebastian after the Monza race.

"We didn't complete the job and we had a DNF in Suzuka [Japan] and some other problems.

Chief F1 writer Andrew Benson: "Fernando Alonso is said not to be keen on Kimi Raikkonen joining Ferrari, but the question is whether that is because he fears him on the track or because it will inevitably take some of the focus of his team away from him.

"Alonso has dominated Ferrari since he joined in 2010 and all the team's efforts are directed at him."

Ferrari team boss Stefano Domenicali added: "The fight for the championship is really very difficult but it doesn't change our approach.

"We need to stay there and take the opportunities if they will come. The experience of last year is still burning for us.

"In a sporting way of course, if something happens to them we need to take the opportunity to attack them."

Alonso said he believed Red Bull would not necessarily continue to dominate in the same manner on the tracks coming up, which require the cars to run in higher downforce specification than the last two races at Monza and Belgium's Spa-Francorchamps.

Vettel said he was aware of his advantage but was only focusing on individual races.

"I am not really thinking about the points situation. Obviously we are in a very good position and I am just thinking about [the next race in] Singapore," he said.

Red Bull team principal Christian Horner said even Mercedes driver Lewis Hamilton - who is 81 points behind Vettel after finishing ninth in Monza - must still be considered a contender.