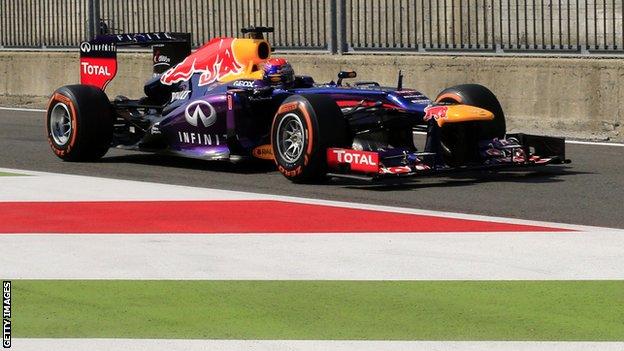 Vettel was 0.283 seconds ahead of his title rival, who split the German from team-mate Mark Webber.

Lewis Hamilton took fourth in his Mercedes, ahead of McLaren's Sergio Perez and Toro Rosso's Daniel Ricciardo, who will be Vettel's team-mate next year.

Ferrari's Felipe Massa was seventh ahead of McLaren's Jenson Button.

Lotus's Kimi Raikkonen, fourth in the championship behind Vettel, Alonso and Hamilton, was only 10th fastest.

Hamilton's team-mate Nico Rosberg was able to complete only five laps before suffering overheating hydraulics that took him out of the rest of the session. He ended up 22nd and last.

Paul Di Resta was 17th after crashing at Parabolica with 25 minutes of the session remaining. The Scot lost control while braking and said over the team radio: "Something broke there."

The team later confirmed it was a front-right brake failure.

Vettel looked in control but his margin of superiority was not as great as it had looked on Friday.

Red Bull team principal Christian Horner said: "Fernando obviously looks pretty quick. I don't think Lewis has completely shown his hand. Rosberg has had an issue but I'm sure will be there or thereabouts. It's the usual suspects."

BBC analyst and former F1 driver Allan McNish added: "Through the high-speed section, the Ascaris, Vettel looked like he was on rails, like the car was easy to drive. He was able to hug the inside kerb whereas the others were sliding a bit wider.

"Red Bull are looking good but I don't think it's cut and dried. Ferrari are close. Not quite there, but in the ballpark."

Ferrari have admitted Alonso needs to beat Vettel this weekend to close his 46-point advantage in the championship.

To add to the pressure, Ferrari president Luca Di Montezemolo turned up during the session and will spend the day with the team at the track.

Full results from the third practice session in Italy.