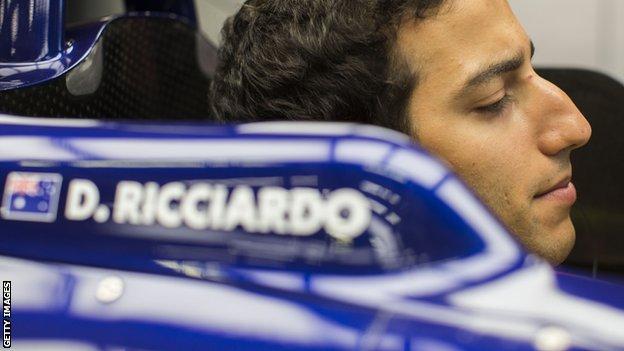 You have to feel for Daniel Ricciardo.

He gets his dream opportunity, picked to succeed Mark Webber next year at the best team in Formula 1 alongside the world champion Sebastian Vettel, and the response of many outside his native Australia was to be underwhelmed, even disappointed, that Red Bull had not chosen someone else.

After all, the team's other options included former world champion Kimi Raikkonen and perhaps even - depending on whom you believed - double champion Fernando Alonso. How millions of followers of F1 around the world would have loved to see either of them go up against Vettel in the same car next year.

Of course, Ricciardo probably does not care - and why should he?

Driving for the team that has won the last three drivers' and constructors' world championships has been his aim for years. In fact, as a member of Red Bull's junior driver programme, it is what is expected of him.

Red Bull brook no failures - drivers identified as potential F1 stars either perform within a certain timeframe, or they are out. Ricciardo is the first since Vettel to be considered worthy of a place in the senior team, so he is obviously doing something right.

In an interview with BBC 5 live on Tuesday evening, Red Bull team principal Christian Horner made it clear that one of the major attributes of the likeable 24-year-old, from whose face a sunny smile is never far away, was that he was "seriously quick".

He has certainly looked it on occasion - sixth places for Toro Rosso in qualifying at Bahrain in 2012 and Silverstone this year were highly impressive performances. They suggested that Ricciardo has the gift of ultimate speed that is vital for a leading grand prix driver.

What is less clear for now - and Red Bull admit this themselves - is whether he has the race-craft and mental fortitude to survive at the highest level, where the likes of Alonso, Vettel and Lewis Hamilton may usually be scrupulously fair, but are also brutally unforgiving.

The races that have followed those sensational qualifying results by Ricciardo have been less impressive. He has tended to sink back through the field, whether alarmingly quickly or more gradually, to finish in the same sort of area as team-mate Jean-Eric Vergne, whom Red Bull have deemed not ready for promotion.

Is this indicative of a lack of racecraft? Or simply a reflection of the car's natural level, which Ricciardo was able to use his talent to push beyond in qualifying, but which over 60 or 70 laps of the race is much harder to do? Next year, the world - and Ricciardo - will find out.

The basic speed, Red Bull insist, is not in doubt. Horner mentioned to 5 live that one of the determining factors in Ricciardo's appointment was what he described as a "really impressive" test for the team at Silverstone in July.

He did not go into detail, but privately Red Bull insiders have. This writer has been briefed that in a car of comparative specification - same fuel load, tyres, etc - and in similar conditions (albeit on a different day), Ricciardo was 0.2 seconds faster than Vettel at that test.

It seems fair to assume that Red Bull do not expect that to happen when they are team-mates next year - not unless they want to provoke some sort of meltdown inside the team. And the evidence of the last few years is that they do not.

Vettel, Horner says, "wants competition, wants someone to push him". What he and the team clearly do not want - judging by the history of the German's relationship with Webber over the past few years - is someone to beat him.

Red Bull are built around Vettel. Understandably so, given the level of his performance over the last few years. But Ricciardo faces an uphill battle if his ambition - as it surely must be - is to usurp him eventually.

Despite the team's protestations that the drivers are allowed to race, that has rarely been the case when they are actually together on the track. Several times, Webber has been told not to try to pass Vettel when he felt he was faster.

Recently, the justification is clear - Vettel is their more consistent front-line performer. But it happened even in 2010, when both were in the running for the title and Webber was actually ahead on points.

If he is to have any chance of turning this around, Ricciardo will have to prove that he can beat Vettel consistently.

The impression so far, though, is that that is neither what Red Bull expect, nor what they want.

It doesn't take a genius to work out why.

How important Vettel's views were in the decision is not yet clear. What does seem clear is that the decision to appoint Ricciardo and the announcement that they had were not made at the same time.

Senior Red Bull insiders have been briefing since before the Belgian Grand Prix that the team had decided to promote Ricciardo - that's how BBC F1 chief analyst Eddie Jordan was able to predict the deal on 19 August.

In Belgium, Webber even went to the lengths of making it clear himself. "The decision is made," he said. "We all know who it is. I'm happy with that decision. It's good for him and it's good for Australia."

And yet over that weekend both Horner and Marko insisted they had still to decide - Horner even went as far as to tell BBC Sport that the team had other options beyond Raikkonen and Ricciardo.

I make no comment myself, but there are those in F1 who believe Red Bull have been playing this situation for all it is worth - and some of them are at Ferrari.

The Italian team were infuriated by the claim that Alonso had made it clear in Hungary - via his manager - that he was interested in driving for Red Bull next year and was potentially available, believing it was nothing more than their rivals trying to cause trouble.

Whatever, the Raikkonen link was very real. There was genuine interest there from both sides, but somewhere along the line - perhaps over money, perhaps over status within the team - talks broke down.

Red Bull insiders knew what they would be getting with Raikkonen - a proven winner who regularly delivers strong points finishes; a step up from Webber, in consistency, if perhaps not in ultimate pace.

But they had doubts - over the levels of his likely engagement, particularly technically, and even over his ultimate speed.

They looked at the comparative performances of Raikkonen and Alonso against Felipe Massa and Romain Grosjean - the last two team-mates for both - and concluded that Alonso was faster, and by quite some margin.

Which meant that Vettel would probably be, too. And if that was the case, they thought, how would Raikkonen respond to being beaten consistently, and how would that affect intra-team harmony?

Ricciardo, on the other hand, is controllable. He knows he owes his place in F1 to Red Bull, so is likely to be a compliant and harmonious team-mate to Vettel, at least for a while, even if he is capable of matching him.