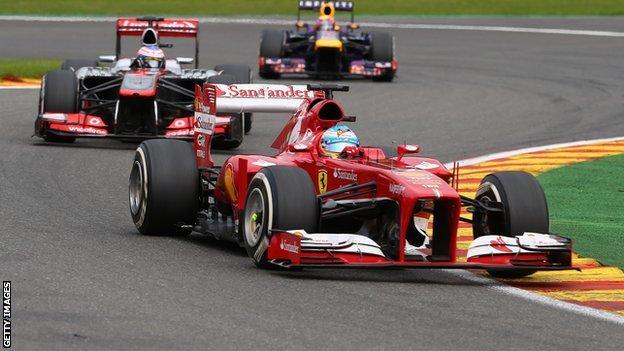 Ferrari tend to go well at their home grand prix at Monza and if you were to ask me to stick my neck out I would say they will set the pace in Italy this weekend.

In simple terms, Ferrari have no choice. They have to be at the front. Fernando Alonso's 46-point deficit to Red Bull's Sebastian Vettel in the championship dictates that.

They have a car that should be well suited to Monza and Alonso can't afford to be chasing down down results from fifth or sixth any more.

To have any chance of beating Vettel they have to take risks and Alonso has to wring the car's neck to get it to the front of the grid. I think they will be able to do that this weekend.

A TRACK WITH UNIQUE DEMANDS

Straight-line speed is vital at Monza, with cars doing 315-320km/h, so the cars are put in low-downforce, low-drag specification.

The cars are tidied up, with some of their aerodynamic appendages removed and skinny rear wings.

Monza, the home of the Italian Grand Prix, is a true theatre of motor racing. The place oozes atmosphere and the race is always one of the highlights of any Formula 1 season.

Ferrari - the team are inescapable there - is the central character in a long-running drama to which history has added depth and meaning.

The race takes place against the backdrop of a lovely city in early September.

Cool, misty mornings usually give way to hot, sunny days. The trees cast moody shadows on the celebrated track, which has seen so much - both triumph and tragedy.

The ghosts of the past seem to seep out of the circuit's structure, especially at the old concrete banking, now long disused but still a reminder of what went before.

And through it all there is Ferrari, a link between the past, the present and the future.

The woods in the famous royal park throb with the support of the hundreds of thousands of fans who flock to the place carrying banners for heroes past and present, willing their team on to the victory that would send the place wild, as it last did in 2010.

No pressure, then, Fernando…

The circuit itself is a good challenge for the drivers and braking stability from high speed is a crucial requirement.

At the first chicane, the driver has to be able to throw the car over the kerbs without upsetting it too much - and it is vital the car is able to put the power down well on exit because there is a long drag through Curva Grande up to the second chicane.

That one is not as difficult. It is easier to run over the kerbs there and it is simply a matter of 'gorilla-ing' - or being rough with - the car.

The two right-handers at Lesmo used to be a huge challenge, particularly the second one, which was very fast until it was tightened up on safety grounds after Ayrton Senna's death at the San Marino Grand Prix in 1994.

It is still crucial to get a good exit on to the long straight down to the Ascari chicane that follows - but because the corner is slower it is easier to do that than it used to be.

Ascari is very fast - the drivers are doing around 125mph through there. The uphill braking zone is pretty tricky and after that it is the middle, right-hand part of the chicane that is most important. It is quite a challenge to get the line correct through there.

Ascari is a quick left, followed by an even faster right, and then the final part is basically just a kink. It looks spectacular because the drivers can free the cars up to ensure they do not scrub any speed off and they run very wide - but it is only difficult in the wet.

The final corner, Parabolica, is very difficult and the most important as far as car balance is concerned. Parabolica is long and if the car has any understeer through there the driver will pay the price all the way down the long pit straight.

However, if the car is too nervous on the rear, the driver will lose lap time because it will eat up the rear tyres.

The teams who can trim the car out and still retain good downforce will be in good shape in Monza.

We saw at the last race in Belgium that Red Bull were able to do that and I expect them to be strong again.

At Ferrari, Alonso has said they are after more consistent downforce and it is easier to find that on tracks when you are not trying to get the car to produce its maximum aerodynamic load because the team can get rid of some of the parts affecting it.

In Ferrari's case, they cut part of the front wing flaps away in Belgium - and the car became much more competitive. That suggests their usual front wing is harming the airflow at the rear of the car.

In contrast, you would not have noticed the difference in Red Bull's front wing at Spa, apart from a slightly reduced flap angle. So we know the airflow off that is well integrated with the rest of the car.

There is a question mark over the Mercedes. Although Lewis Hamilton was able to put the car on pole in Belgium, that was on a damp track.

The Mercedes had not looked that fast up to that point, and Hamilton faded to third in the race, unable to keep up with Vettel and easily caught and passed by Alonso.

I suspect they may be in a similar position in Monza, too.

Gary Anderson is the former technical director of Jordan, Stewart and Jaguar. He was talking to BBC Sport's Andrew Benson