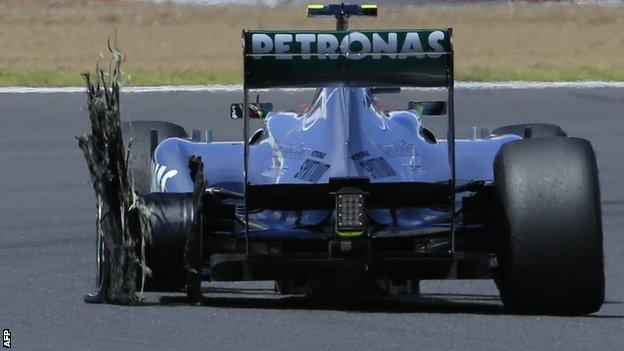 Pirelli will strengthen its tyres ahead of this weekend's German Grand Prix to try to avoid a repeat of the six blowouts seen at Silverstone.

The rear tyres' internal belt will be made of Kevlar at the Nurburgring this weekend rather than the usual steel.

Then for the Hungarian Grand Prix at the end of July, Pirelli will revert to its 2012 construction, which is different to that used this year.

"In the racing fraternity, tyre failures are known as driver killers.

"That is why the problems seen at the British Grand Prix, where four drivers suffered severe blowouts, caused such a concern.

"There are few issues that are more serious than that. And tyre failures - like brake failures - are right up there as being as bad as it can get."

The aim is to make the tyres more resistant to cuts and punctures.

Pirelli is expected to announce the changes later on Tuesday.

Hamilton, who had been leading when his left-rear tyre exploded, said something needed "to be done straight away" to solve the issue.

Speaking after Sunday's race, Pirelli motorsport boss Paul Hembery said an investigation was under way to find the cause "as soon as possible ahead of the next grand prix".

Only the rear tyres are changing for this weekend's race in Germany, the fronts will remain the same as they have been all season.

Kevlar is a flexible, reinforced fibre that is used to help reduce punctures.

Previously the rules allowed teams to block Pirelli from changing the tyres but the safety issues raised by six cars suffering tyre deflations at the British GP - and at least two others being found at pit stops to have tyres on the verge of failure - have forced governing body the FIA to intervene.

The FIA announced on Monday evening that it would change the rules to allow the tyre specification to change within the season without the unanimous approval of the teams.

It has also allowed the race drivers to take part in this month's young driver tests to enable Pirelli to do tyre development work.

The 2012 tyres which will be reintroduced for the Hungarian race are different again from the tyres to be used in Germany.