In his latest column for BBC Sport, Lewis Hamilton talks about spending the day with the RAF Red Arrows, his love for the British Grand Prix and his close relationship with Nelson Mandela.

I'm sure a lot of people reading this will think that driving a Formula 1 car is a fun job - and it is. But as F1 drivers we also have things we would really love to try out. In the run-up to the British Grand Prix, I had the chance to fulfil a lifetime's ambition. 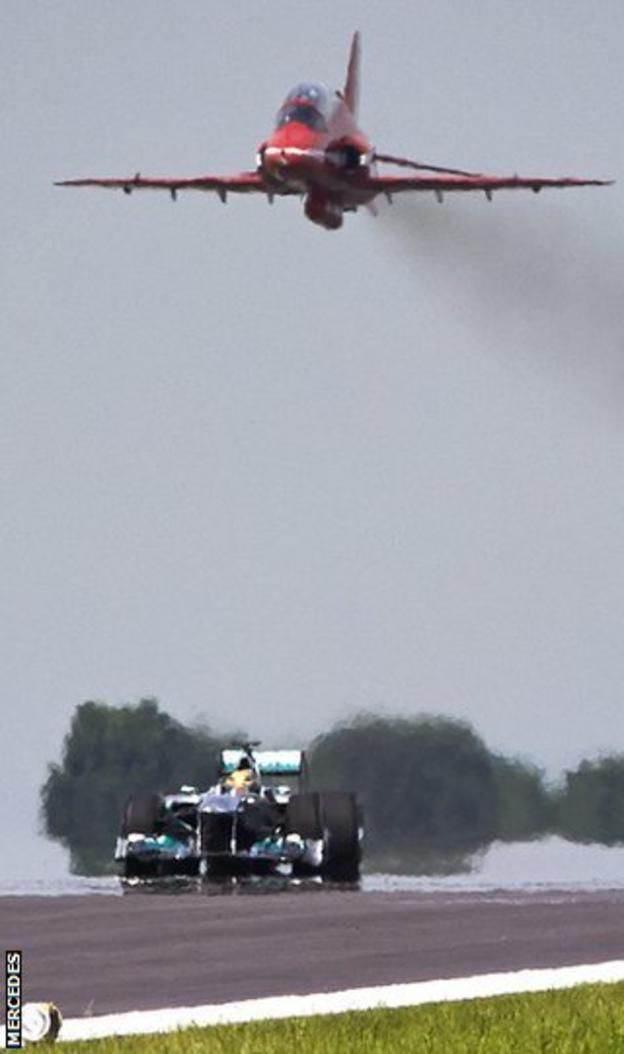 I spent a day with the RAF Red Arrows making a film that you can see in the build-up to the British Grand Prix on BBC One on Sunday.

It was such an incredible day: a day that anyone would dream of doing. Looking back on it, I still can't believe I've been in a fighter jet.

When we first got there we had a briefing about what was about to happen, then we went out in the jet for about half an hour.

We did turns, loops, flips and I even got to fly the plane, which was pretty cool.

I've never done anything like that before and I flipped and rolled it. It was fantastic - just to feel the G-force was spectacular.

I got out of the plane and felt really bad, like seasick. It's very different from an F1 car. We are used to big G-forces but they are all horizontal. In the jet, the blood runs to your legs.

After that we did a demonstration on the runway with the jet and our F1 demo car, trying to sync us so we were travelling along at the same time.

Then we went up again and did the first half of a Red Arrows formation display. I didn't want to be a part of the bit where they fly towards each other. That would have been too much!

The best bit was right at the end when you come apart from the formation really aggressively and you pull a lot of G-force. It felt like I nearly passed out at the last run.

It hasn't made me want to fly my own plane - but I do enjoy flying model aeroplanes. Although I tend to crash them quite a lot. 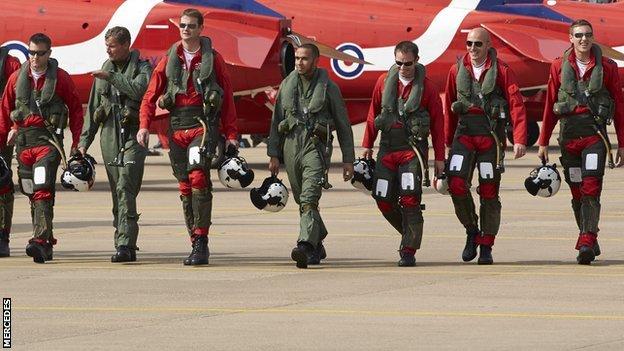 The Red Arrows was a brilliant build-up to the British Grand Prix, which is one of the highlights of the year for me.

I love racing in front of the home crowd and it's unlike any other grand prix we go to.

The turnout and support you get as a British driver is always a surprise. Even after all these years it's still a shock to the system seeing all those people standing out in whatever weather, holding flags for you. I never thought I would have so much support.

The drivers' parade on Sunday morning at Silverstone is always great. I try to point to as many of the fans as I can, just as a way of connecting with them and making them realise I have noticed them and appreciate the support.

Silverstone is also a very special track to race on. It's a proper high-speed circuit where you need to be incredibly precise. It's a real challenge for the car and the driver.

This is going to be the first year since 2008, when I won, that I have a car I can compete with. I am really excited to get out there and see what I can do with it.

What I want to do is get the car on pole position. I don't know whether we'll be in a position to do that, but I hope so.

I'm fourth in the championship heading into this race and still very much thinking it's a possibility.

I dream of the championship every day. I dream about racing all the time, about what it would be like to succeed again.

I'm still living the dream for so many people out there, trying to do my best, trying to keep my head up and ignore some of the negative stuff that's in the media sometimes.

SOME WORDS FOR NELSON MANDELA

The health of Nelson Mandela is a big concern for everyone at the moment, and it has a special resonance for me.

I have had the privilege to get to know 'Madiba' over the last few years. I met him in London a few years ago, and remember it was like walking in and seeing a king on his throne.

After that, he invited me and my family to South Africa. We went on a game reserve and then met him in his private office. Nicole sang for him, which is something both of us will always remember.

Since then I have stayed up to date with everything he is doing. I am close to his right-hand lady, who is with him all the time, and always send them messages.

He has become like a grandfather to me; that's how I look at him.

He has had such a huge influence on everyone in the world. It is remarkable to meet someone like that, who has achieved so much. It makes you realise how little I have achieved in my life and how much harder I have to work, and how much more there is to do.

He is a very humble guy - talking to him you would never believe the things he has gone through and what he has done in his life.

He is like a father to us all, and has set an incredible example for the rest of the world to follow.