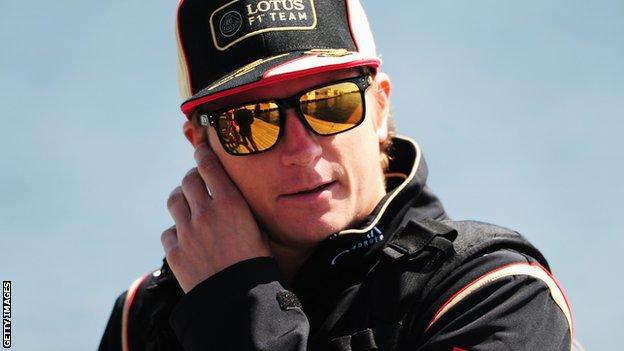 Kimi Raikkonen says he has not made any decision about his future in the wake of Red Bull driver Mark Webber's decision to leave Formula 1.

Raikkonen, who races for Lotus, has been linked with a move to Red Bull.

Asked about his future following Webber's decision to drive for Porsche in endurance racing next year, Raikkonen said: "I have not made any decision for next year.

"I can do whatever I want because I don't have a contract."

Raikkonen added: "What he [Webber] does is nothing to do with me."

Red Bull team principal Christian Horner says Raikkonen is "an option" for 2014, while the team also have the choice to promote one of their junior drivers at Toro Rosso - Daniel Ricciardo or Jean-Eric Vergne.

Raikkonen admitted that whatever the decision he makes about his future, it will not be one he takes lightly.

He said: "It's never easy. It's not the first time that there are different options on the table, then you take the one that you think is right for you at the moment. It's hard to say if it's the right or wrong decision, but then you have to live with it, whatever it is."

Regarding the prospect of having title rival Sebastian Vettel as a team-mate, were he to join Red Bull, Raikkonen added: "I have no problems racing with anybody.

"I've never been in a position to choose who I drive with, so it doesn't change anything."

Focusing on the remainder of this season, the Finn admitted that he needed to beat Vettel and Ferrari's Fernando Alonso at the British Grand Prix this weekend after scoring only three points in the last two races.

"For sure we have to do much better than the previous couple of races," he said. "That has hurt us quite a bit in the championship.

"We have to get back where we were before those two races and gain some points on the two guys ahead of us. That isn't going to be easy but we will do our best and see where we end up."