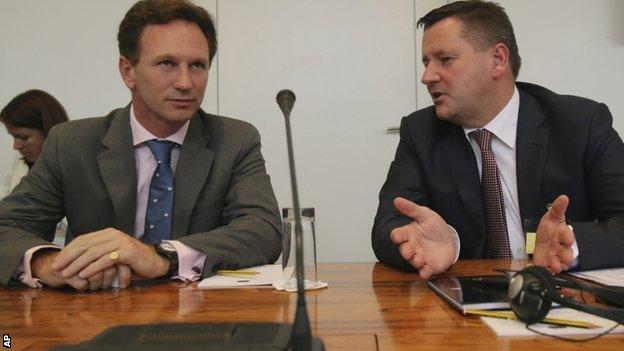 Red Bull team principal Christian Horner says the penalty Mercedes were given for an illegal test was not strong enough.

Horner's protest led to the international tribunal hearing last week at which Mercedes were given a reprimand and banned from July's young driver test.

Horner said: "The verdict was, I believe, right. They found them guilty of breaking the sporting regulations and sporting code.

"What is slightly confusing is the leniency of the penalty."

Mercedes were investigated for a three-day test at Spain's Circuit de Catalunya, which they conducted on behalf of tyre supplier Pirelli.

Horner, who was talking to the Reuters news agency, said: "The problem with the penalty such as the one Mercedes have been given is that it is not a particularly strong deterrent to break the sporting regulations. I should think it was met with a huge sigh of relief at Brackley (the Mercedes factory)."

He added: "They've deemed it illegal to test but the sanction for doing that test doesn't fit the crime. We need further clarity from the FIA to clear up what is and isn't permitted."

But Horner countered: "Yes, it's probably annoying for them to miss it (the young-driver test), but it pales into insignificance compared to the benefit you would see from running your race drivers around a race track for 1,000 kilometres on a circuit that has been rubbered in two days after a grand prix weekend.

"You don't test with young drivers over the winter for a reason. You have a limited amount of test mileage with your cars and you choose to put your race drivers in because they give you the most relevant feedback."

Horner also questioned Ferrari's use of a 2011 car - which is permitted by the regulations - in a separate Pirelli test in Barcelona before the Spanish Grand Prix, which the Italian team then won.

"Ferrari, within the regulations, ran that car. But is it right for a competitor to be doing over 1,000 kilometres of testing on tyres you are potentially racing with in the heat of a championship battle?"

Horner implied that he felt Mercedes had benefited from the test in helping them solve the problems they have been having with excessive tyre wear.

"The very next grand prix (after the test) they had one of the lowest (tyre) degradations. That might purely be coincidence, and I'm sure the circuit (Monaco) lends itself more to that," he said.

"But in Montreal (the race after Monaco), they didn't experience the tyre issues they previously experienced, so let's see."