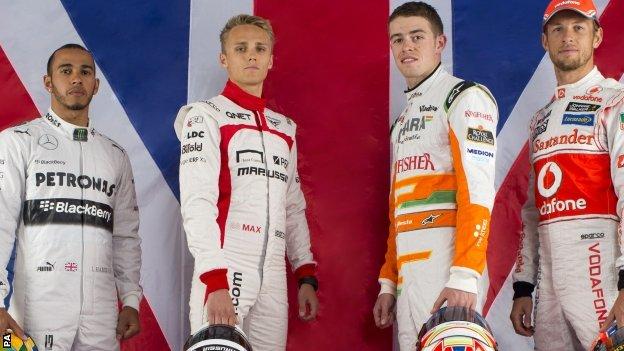 Among the topics Gary discusses this week are:

- McLaren so far this season

Who will win the British Grand Prix this weekend? @jdlJanDavid

Fernando Alonso, because I think the Ferrari is strong on this type of circuit. It is good on its tyres on race day, his determination to win a championship this year is higher than ever, and he needs to pull back that deficit to Sebastian Vettel.

Don't you think Mercedes and Pirelli were let off too easily for conducting their tyre test at Barcelona last month? @ronnie_sandip‬‬

Definitely. Never mind anything else, they broke a rule and they should have had a greater penalty than they were given.

Is Vettel the most undeserving world champion? And is Lewis Hamilton right to worry about his legacy with only one world championship title to his name? ‏‪@JohnLarkinF1‬‬

Anybody who can win as many races, poles and world championships as Vettel has deserved everything he's got. Yes, he has driven one of the best, if not the best, cars in the pit lane during his period in F1, but you still have to do the job. He has a team-mate and if you can beat him you are doing a good job. And his team-mate is no mug. Vettel is as good as anybody in current or past F1 as far as talent is concerned.

Hamilton? It's a tricky one. He went off the rails a couple of years ago in terms of looking for something else that is not F1. I think from that point he has lost his focus a little bit. He can still drive a racing car and do the job but he has to realise it is not a Sunday afternoon job any more. It is dedication seven days a week to make yourself better and I think Lewis has gone off the rails a little bit as far as that total and utter commitment is concerned.

With the money and personnel Ferrari have, how come they seem so far behind Red Bull in terms of car design? ‏‪@BurpleMan‬‬

Because they don't have a visionary leading the technical group, someone like Red Bull's Adrian Newey. Adrian is good at seeing past the results for the wind tunnel test or whatever. He knows where he wants to get to and he will pursue that avenue. It would appear James Allison is going there and in the pit lane at the moment he is probably the second best visionary.

Do you think tyre choices for Silverstone are overly conservative as a result of prior tyre issues this season? ‏‪@JD_Newmarket‬‬

It does look like they have gone too conservative, yes. We have had lots of politics about tyres. I have never thought they were that bad. But it will be interesting to see what people think if we do get lots of one- or two-stop races when nothing really happens. Pirelli are playing the game a little bit that way to relieve the abuse they are getting.

Do you think that McLaren would be this far behind the leading pack if they still had Hamilton? ‏‪@Joolz_MF‬‬

I believe they could be in the leading pack with Hamilton. I believe they have lost their true determination. Last year Jenson Button dropped away for no real reason. Jenson in a way is too nice a guy. If Lewis had been there he'd have been spitting the dummy. I have no way of understanding why McLaren aren't responding to the situation in a much more positive manner than they are. Building the car they have got is not the problem for McLaren now; it's the fact they have no idea how to react.

Should McLaren keep trying to develop their way back up the grid or just write this year off and focus on 2014? ‏‪@andrew_tyrrell8‬‬

You can never run away from the fact that you have built a car that has a problem. You have to identify the problem and say we can't fix it because it's in the concept, which I don't believe on the McLaren it is. Or you have to identify it and fix it. Because when you're making decisions for next year's design you need the confidence that you understand the basic principles of the car. That's what they're not doing at the moment.

Now, they may at Silverstone have some tweaks that make it work but they need to prove that to themselves before they make big decisions for next year otherwise they are going to be making decisions based on not taking any risks. So they have to pursue this year's car. Next year's cars are not that different aerodynamically.

Looking at Force India's performance this year, what has been their major strength? ‏‪@NotSavio‬‬

Understanding the tyres. They have got a car that is qualifying in the top 10 when they don't trip up and it is very good on tyres. But you have to say McLaren and Sauber have both dropped the ball. So Force India are doing as good a job as they did last year and benefiting from other people dropping the ball.

What are you most excited about with the 2014 regulations? ‏‪@echaurij‬‬

For any engineer, the challenge of any new regulation is great. So the new V6 turbo with increased electrical power is a great challenge. But taking it further than just being an engineer, I believe the change was made to make it look like F1 is a bit more 'green'. I don't think they needed to change the engine package to do that. It could have done that in lots of other ways. But when you put in control criteria, such as the fuel limit for next year, you end up with the potential that people will drive around saving fuel and that lots of things will happen during the race that the viewer and commentator have no idea about. And we are opening up that door. If you think this year's confusing - wait until next year.

When is there going to be a female F1 driver? ‏‪@mossup‬‬

I don't see one coming through the ranks at the moment who has the talent. I believe there are females out there who could do a good job. Susie Wolff has driven a racing car fairly competitively. She isn't going to mix it with Lewis Hamilton, but she is a talented driver. That description goes for some of the current male F1 drivers, too, so there are males out there the same level as Susie Wolff. But I don't see a woman coming up who is going to be the real McCoy.

What tips do you have for a wannabe aerodynamicist/technical director? ‏‪@MrFakeBoulier‬‬

You need the qualifications, so get yourself to university. You also need to get your head down and get yourself a job with a racing team, whether it's Formula Ford, Formula 3 or whatever, so you have some solid experience on the ground. And keep writing to F1 teams every day of the week because the day an F1 team wants somebody, if your application arrives on that desk on that day, that is when you will get the job. They won't be filed and put in place and call you up because you're a good guy. It will happen by accident.

Can you describe the experience of working with Eddie Jordan for the first time? ‏‪@puranikavi‬‬

Well, it was an experience, I think is the best way of putting it. Eddie is a great guy. The way he is now is the way he has always been. When we had the F1 team, we had a huge amount of financial pressures. But although we argued and fought many times, we are still good mates and it was a pleasure to work for him. He is one of those guys who is what he is and you have to accept he is not going to change. It was a great challenge but I would do it again tomorrow.