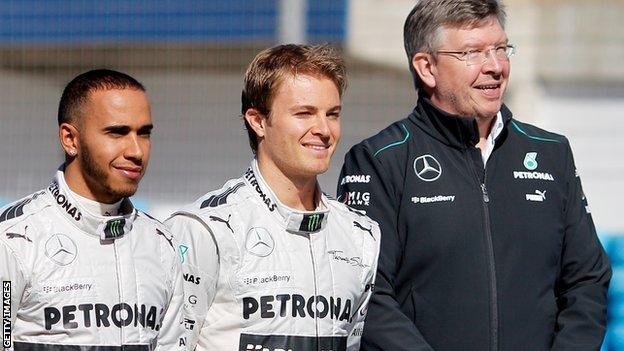 Mercedes principal Ross Brawn says his team have a "blemish-free" record, despite their reprimand for taking part in a controversial Pirelli tyre test.

In-season testing with a team's current car is banned but Mercedes took part in a 1,000km trial organised by Pirelli.

The FIA consequently banned the team from this year's young driver test.

But Brawn said: "We have a blemish-free record here and it was very important to Mercedes that the facts of this case were understood."

"It does sometimes strengthen your resolve rather than weaken it but now it's cleared away we can concentrate on the rest of the year," he told Sky Sports News.

Mercedes defended taking part in the test by insisting they had not benefited from any of the data gathered, and that they had the permission of FIA race director Charlie Whiting to use their 2013 car.

They said the reason for taking part in the test, in which drivers Lewis Hamilton and Nico Rosberg took part, was primarily to assist Pirelli resolve tyre safety issues.

The FIA accepted that neither Pirelli nor Mercedes acted in bad faith.

The sport's governing body said it hopes "lessons are learnt from this case and from the decision handed down".

"We all need to look at the process. It's clear the process went wrong," said Brawn. "We need to make sure we find ways of stopping these things in the future.

"We had reason to believe we had permission to do that test and from that perspective were happy.

"Obviously things have gone wrong and we have received penalties, we understand that and we accept it."