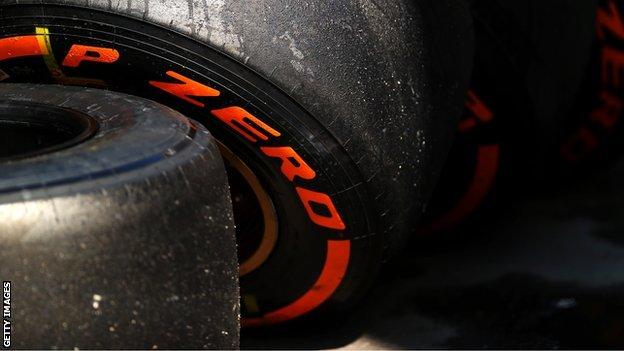 The decision by Formula 1's governing body to issue a reprimand against Mercedes and Pirelli for their illegal tyre test last month, and to "suspend" the team from the forthcoming young driver days, is an attempt to deal fairly - and be seen to do so - with an issue that has caused uproar in the sport over the last month.

Whether that is what they have achieved will depend on your opinion. It is fair to say that some of Mercedes' rivals do not believe that to be the case.

A reprimand has been viewed by at least one team as effectively a let-off - the absence of any punishment at all. BBC F1 technical analyst Gary Anderson sums up this opinion by saying: "So a team can go off and test and get their knuckles rapped? It's absurd."

Others have looked at the verdict and said they were "perplexed about the rules and how they are handled".

An alternative view, a counter-point if you like, is that the tribunal has indeed responded to the calls of those such as Red Bull team principal Christian Horner to impose a sporting penalty - that of not being allowed to take part in the young driver test at Silverstone next month.

This could be viewed as effectively balancing things out between the teams - Mercedes got to do a three-day test in Barcelona to which the others were not invited; they are as punishment now being barred from a three-day test at Silverstone which all the others will attend.

Read more about the findings

Mercedes would undoubtedly argue that the Silverstone test would be more use to them than was Barcelona.

They say the "Pirelli test" was "blind" - they were not allowed to change the car beyond basic balance adjustments and they did not know what tyres Pirelli was using at any point.

By contrast, the young driver test will be used by all teams to test new parts on their cars, solve problems, and assess tyres.

In response to that, Horner has already said that it is "preferable" to test with race drivers rather than test drivers.

And others will doubtless add that they view the punishment as pretty lenient given Mercedes have been found guilty of:

1)breaking a testing rule that was clear to all teams, even if Mercedes tried to debate its meaning at the tribunal, which rejected their arguments;

And so the debate will go on, in the way these things do in F1.

Beyond the specific argument about the rights and wrongs of the judgement, though, is a wider picture, and it is not a particularly pretty one for many of those involved.

Despite the seven hours of evidence and legal argument in the FIA headquarters in Paris on Thursday, some questions have still not been answered fully.

After approaching FIA race director Charlie Whiting to ask whether it was OK to use a 2013 car for the test, Mercedes were told that in theory it was, as long as Pirelli "invited all competitors to participate in such tests and [was] able to demonstrate that it has done so".

So why, as the FIA put it, was no other team, on this occasion, informed by either Mercedes or Pirelli of the opportunity to carry out similar tests, informed that the Barcelona test was contemplated or asked to participate in or have a representative at the test?

Mercedes team principal Ross Brawn was well aware of the other teams' views that article 22.4 banned testing with a current car - why else would he ask Whiting for permission? So why was he not scrupulous in ensuring that the other teams were informed to avoid any controversy?

Having been told the other teams must be informed, why did Mercedes and Pirelli go to such lengths to conceal the test - including having the drivers in black helmets, a decision they now say they regret?

Why did Whiting and the FIA's lawyer say they thought the test was permitted when they knew the understanding among the teams was that it wasn't?

The truth is that the verdict has left none of the parties involved looking especially good.

Brawn - who has made it clear throughout that taking part in the controversial test was his decision - has revived awkward memories of the reputation he earned throughout his days at Benetton and Ferrari as someone who pushes the rules to breaking point.

In Pirelli's defence, it has been put in an impossible position - of being F1's tyre supplier while not being allowed to test the product it supplies in representative conditions.

But its attempts to do so, while rooted in desperation at the teams' continual inability to come up with a solution and apparently approached with the best intentions, have been handled badly and left a sour taste with many of its clients.

And as far as the FIA is concerned, many will be perplexed how it can offer a legal opinion to a competitor that was considered by that competitors' rivals to be contrary to its own rules - as has subsequently been found by its own tribunal.

Will there be ramifications? The last few weeks have been a hot bed of speculation about whether this would affect the futures of Brawn, Whiting and Pirelli, and on that only time will tell.

In the meantime, if there is a lesson to come out of this, it is a simple one.

F1 badly needs what Mercedes described in its official statement accepting the tribunal decision as "a more rigorous procedure for testing in the future, particularly to support the appointed tyre supplier".

Because that is the point - this whole situation arose out of the sport's inability for three years to agree a satisfactory means by which Pirelli could test its tyres.

The first steps have been made towards this with the planned reintroduction of limited in-season testing for next season.

But this is simply indicative of a wider problem - of teams unable to solve problems that affect the whole sport because of their own self-interest. And that one remains.