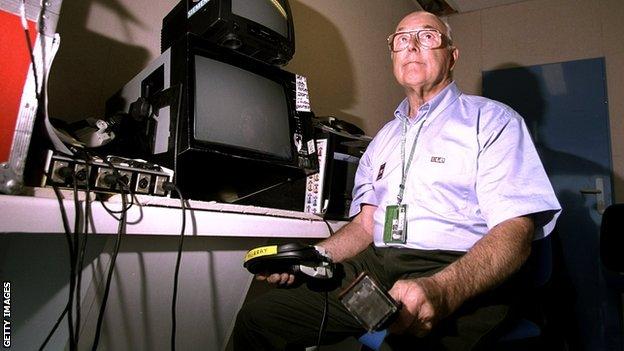 Legendary Formula 1 commentator Murray Walker has been diagnosed with cancer.

The 89-year-old said he had a form of lymphatic system cancer, which was diagnosed during tests after a fall in which he broke his pelvis last month.

"They've caught it incredibly early. It's treatable, the doctors say my condition is mild and I'm very hopeful," Walker said.

Walker is to have a programme of chemotherapy over the next few months in an attempt to cure the disease.

He has cancelled his plans to attend the British Grand Prix at Silverstone over the weekend of 28-30 June.

"I was looking forward to going to Silverstone, but I have really got to concentrate on getting the chemicals inside me, getting over it and getting back into form as quick as I can," Walker added.

"I fell over on holiday in Germany and fractured my pelvis, which I thought that was pretty rotten luck. But if I had not had that, I would not have had all the blood tests and they would not have found out about the cancer. It was a blessing in disguise."

BBC F1 editor Mark Wilkin said: "I spoke with Murray this afternoon and it's good to hear he's in good spirits. Our thoughts are with him and we're all really hopeful he can make a full recovery."

Walker has become synonymous with F1 over more than 30 years of commentary, first with the BBC and then with ITV.

He retired from full-time commentary after the 2001 US Grand Prix but has continued to work in F1, where he is regarded with great affection and admiration.

Since the BBC regained the television rights to the sport at the start of the 2009 season, he has been involved in a series of features on the BBC Sport website.

These have included Classic F1, F1's greatest drivers and, this year, Murray's Memories.

As a broadcaster, he is famous for his high-energy commentary style and his propensity to mis-speak in an amusing manner.

He has been a regular feature in Private Eye's "Colemanballs" column and is the subject of a number of websites that have collected his most famous sayings.

His most famous catchphrase is: "Unless I am very mistaken… and yes, I am very much mistaken."

Walker was also well known for his enthusiastic shout of "Go, go, go, go!" at the start of many grands prix.