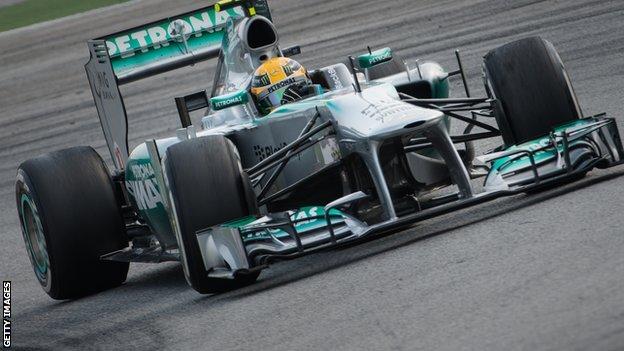 In-season testing will return to Formula 1 next year.

The testing was banned in 2009 because of cost but a new package of measures is aimed at reducing expenses by restricting other development plans.

Teams have agreed to hold two-day tests after the British and Spanish Grands Prix and following two out of either the Germany, Belgium and Italy races.

The new agreement restricts aerodynamic development on computers and in wind tunnels, plus other forms of testing.

Teams finalised the plans in a meeting at the Canadian Grand Prix and it will now go to governing body the FIA for final approval. That is expected to be a formality at the next meeting of the world council on 28 June at Goodwood House in West Sussex.

The four days of aerodynamic tests on straights or constant radius tracks and three days of young driver testing allowed this year have been removed.

And the eight 'promotional' days on control tyres, which teams currently use to test new parts, have been cut to two.

Insiders say the new agreement will help teams try out new drivers, the difficulty of which has been criticised in recent years.

Rather than this being restricted to the current three days, teams will be likely to use aspiring drivers for the post-race tests next year as they will happen immediately after races.

Much of the momentum for the new agreement has come from the smaller teams, who will be able to use the tests to raise revenue by charging young drivers for time in the car.

Meanwhile, there is also a discussion about the possibility of a record 21-race calendar next season, with the addition of new races in Sochi in Russia and New Jersey in the USA.

New Jersey was originally intended to make its debut this year but was postponed because the organisers were not ready.

There remains uncertainty about whether the race will happen even next year - as there is about the Korean Grand Prix.

The race in the far south-east of the country has not taken off since its debut in 2010 and its financial viability is in doubt.

Talk of the first race being in Bahrain has continued since the idea was first proposed around the time of this year's race in the Middle Eastern kingdom, where the existence of civil unrest has raised questions about the grand prix.

Teams are planning to have more pre-season tests in the Middle East to guarantee better weather after this season's preparations were disrupted by rain.

A first race there would off-set the costs of holding testing in the region as cars could remain there between testing and the start of the season.