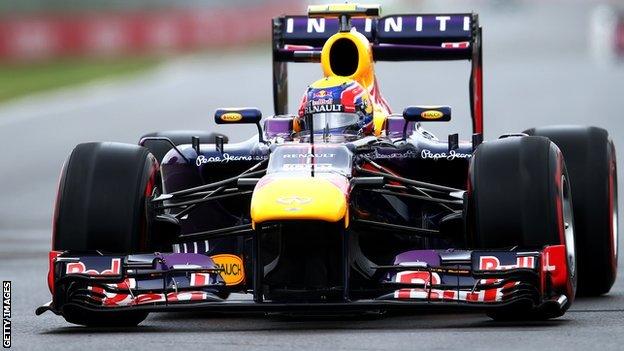 The drivers managed to fit dry-weather 'slick' tyres only for the final few minutes and Webber was the last man to set a time as the track dried rapidly.

We were not playing games. We were very competitive and that's the reality of the car

The Finn was one place ahead of McLaren's Jenson Button, who was second fastest when he completed his final lap only to see others overtake him as they completed their own final laps.

The session was cut short to half an hour following repairs to the barriers needed after an accident in a support race.

And when the session did start, many of the big names chose not to run on the damp track.

Mercedes team principal Ross Brawn explained that the teams could not learn anything in the conditions and needed to save 'intermediate' tyres for the race, as they only have four sets for each driver and showers are predicted for Sunday.

If conditions are dry, Mercedes are considered favourites for pole position in qualifying, which starts at 1800 BST.

Neither of their drivers has ever been out-qualified by a team-mate at the Circuit Gilles Villeneuve, a record one of them will lose on Saturday.

Red Bull and Ferrari appear to be Mercedes' closest challengers on one lap pace, but look much stronger than Mercedes on race form.

Ferrari's race pace in the Friday practice simulation runs was described as "formidable" by Brawn.

Ferrari development driver Pedro de la Rosa said: "We were not playing games. We need to prepare the car. We were very competitive and that's the reality of the car. The race pace is very strong but we need to make sure we qualify well."

The weather forecast suggests it should stay dry, but showers are possible.