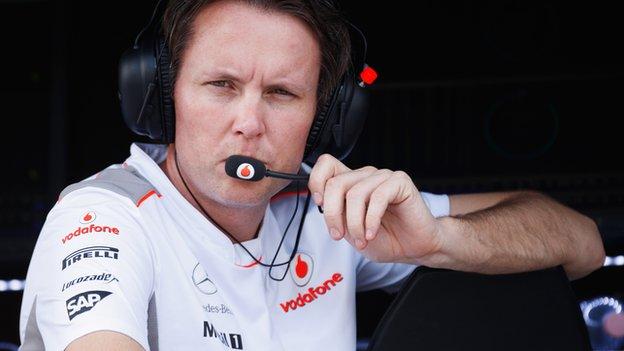 McLaren concede they are at the "bottom of the trough" but believe they are making small steps towards becoming competitive once again.

The Woking-based team have had one of their worst starts to a season, with Jenson Button and Sergio Perez yet to finish on the podium.

"When you're at the bottom of a trough it is important to see progress," said sporting director Sam Michael.

"We are making small steps in the right direction."

Button and Perez have collected just 37 points between them after six races, 70 less than championship leader Sebastian Vettel has managed alone.

This weekend's race in Canada is one McLaren traditionally do well in.

The team have won it on 13 occasions, including the last three.

McLaren will test new parts in Canada, and while Michael is not expecting any significant changes to the MP4-28's performance as a result, he believes the car is improving.

"I think Montreal is a track that has been quite good to McLaren over the years and we will go there with some more things to investigate and try," added Michael.

"We're developing the car, the car is getting better; it's still not as fast as we hoped and not returning to the relative performance that we'd like, but it is still moving in the right direction."

Button won in Montreal two years ago, but is keeping his expectations in check for this weekend.

"Overall, Canada has been a pretty good circuit for McLaren," he said.

"We've won there the last three races, but this time around we're not going to set the world alight simply because we are going to Canada.

"While we won't be heading to Montreal with a winning package, we're making steady progress, and there's always that added motivation you can pull off a surprising result at this race."