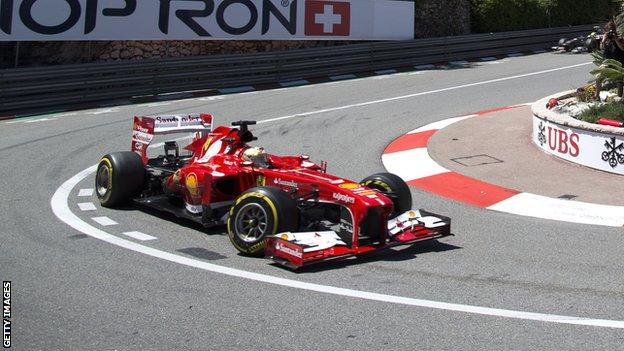 Fernando Alonso has spent the days since the Monaco Grand Prix doing "hard training" on his bike.

If the Ferrari driver was using his usual physical preparation as a form of catharsis, it would be understandable.

Monaco was an unusually poor race for Alonso and Ferrari and it has left awkward questions hanging over their title campaign heading into this weekend's Canadian Grand Prix in Montreal.

Seventh place around the streets of the principality was a continuation of Alonso's up-and-down season.

Of course Alonso is still phenomenal. But there are just the odd signs, little things here and there, perhaps a slight dimming of commitment, stuff like that

Two wins in China and Spain and a strong second in the season opener in Australia have been interspersed with a retirement in Malaysia and an eighth place in Bahrain caused by a failure of his DRS overtaking aid - and subsequent mix-up between team and driver.

Alonso may have scored only four points over two races in Malaysia and Bahrain, but it was obvious he could easily have finished on the podium in both without his problems.

In Monaco, though, Alonso and Ferrari were flat uncompetitive for the first time this season - and that on a circuit where the Spanish two-time world champion has usually excelled.

Barring accidents, mechanical problems or strategy errors, it was the first race in which Alonso has gone backwards from his starting position since last year's British Grand Prix - and that was only from pole to finish second. And even then it was arguably caused by a team error in tyre strategy, leaving him helpless to fend off Mark Webber's Red Bull on faster tyres in the final stint of the race.

Before Silverstone in July last year, you have to go right back to the 2011 Spanish Grand Prix - more than two years ago - to find a race in which, on pure pace alone, Alonso has finished lower than he started.

The inconsistency of Alonso's season is reflected in the championship standings. Heading to Montreal this weekend, he is 29 points adrift of leader Sebastian Vettel of Red Bull. That's more than a clear race victory, after just six races.

Without the errors of Malaysia and Bahrain, he would probably be leading by a small margin. Which, in the aftermath of the struggles of Monaco, begs the question of whether Ferrari might have blown this one already.

Little wonder, then, that Alonso has been engaging in a bit of positive affirmation.

Alonso is partial to a bit of Eastern warrior philosophy, and on Sunday night after the Monaco race he wrote on his Twitter account: "The rain only becomes a problem if you do not want to get wet. #Samurai."

The following day he added: "It does not matter how slowly you go, as long as you do not stop."

Alonso resorted to similar use of Twitter after last year's Japanese Grand Prix, another disastrous race for him, when a crash at the first corner allowed Vettel to close to within four points of the Spaniard. It was one of two incidents it was possible to say cost Alonso the title last year.

Back then, the warrior philosophy failed to come off - but only just. After falling further behind Vettel after the German's wins in the two subsequent races in Korea and India, Alonso actually outscored him over the final three grands prix of the season. And although he lost the title, it was by only four points, when after India the margin had been out to 13.

The irony is that while Ferrari's car is more competitive this year than it was in 2012, they have lost their ability to maximise its potential. Red Bull, by contrast, are not as quick as they were last year - although the car is still out-and-out faster than the Ferrari - but Vettel is so far showing Alonso-like levels of consistency.

That is why the Monaco performance was so concerning for Ferrari. Before that race, they had the reassuring notion that they had the pace to get back in the game. After Monaco, that does not seem so certain.

"We didn't have the pace and we have to understand why," said Ferrari's team boss Stefano Domenicali, "but we are used to reacting very quickly after a difficult weekend."

With the pressure of the 2013 title race mounting, this was not an ideal time for Ferrari to get caught up in a political row, but that is what has happened.

After lodging, with Red Bull, an official protest against Mercedes' 'secret' Pirelli tyre test before Monaco, Ferrari have found themselves embroiled in the scandal too - as a result of their own tyre test between Bahrain and Spain, the existence of which also emerged on race morning in Monaco.

The crucial difference - in Ferrari's eyes - was that they ran their tyre test with a 2011 car, operated by their Corsa Cliente show-car division.

Although the rules are not completely clear, most teams had understood that using a two-year-old car was acceptable. Mercedes used a 2013 race car, which seems to be specifically outlawed, at least by the sporting regulations.

Either way, both teams have been asked for an explanation by governing body the FIA and the controversy is clearly not going away in a hurry.

Ferrari's challenge is not to allow the tyre row to be a distraction to their work at the tracks.

For a driver as single-minded as Alonso that is unlikely to be a problem, but still he will have things preying on his thoughts.

This is the seventh season since he won the second of his two world titles with Renault. No driver has had longer than that between two world championship victories. In fact, in the entire 63-year history of F1, only Niki Lauda has a gap as big, between 1977 and 1984 - and that included two years in 'retirement'.

An ex-F1 driver I know believes he can see the beginnings of decline in Alonso.

"Of course he is still phenomenal," this driver says. "But there are just the odd signs, little things here and there, perhaps a slight dimming of commitment, stuff like that."

The conversation took place some time before Monaco, but was the cautious Alonso in that race, who was mugged by McLaren's Jenson Button and Force India's Adrian Sutil, evidence that the ex-driver might have a point?

To be fair, Alonso was driving a Ferrari whose performance had been affected by a piece of another car trapped under his floor, and he had one eye on the championship while racing other drivers for whom that was not a concern. And fellow title contender Kimi Raikkonen's failure to apply similar caution when he tangled with McLaren's Sergio Perez cost him more points than Alonso lost from slipping back a couple of places.

Nevertheless, Alonso looked a different driver in Monaco from the one who produced the perfectly judged, crushing win in China, or the spectacular pass of Kimi Raikkonen and Lewis Hamilton in one go around the outside of Barcelona's daunting Turn Three on the first lap of another in Spain.

Alonso - who at 32 next month should be at his peak, and has arguably been the sport's best driver since mid-way through 2010 - will hope Canada marks an immediate return to competitiveness and points-scoring, on a track where he has been strong in recent years.

Just as importantly, for the sake of his title challenge, he needs to start beating Vettel again, and consistently.

There is no doubt he and Ferrari cannot afford too many more bad weekends if that title drought is not to stretch into territory from which, historically speaking at least, there has been no coming back.