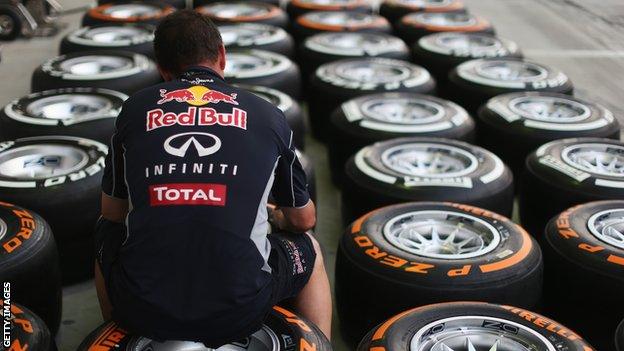 All the talk in Formula 1 at the moment seems to be about tyres - whether it be the controversial 'secret' test conducted by Mercedes between the Spanish and Monaco Grands Prix or the way the tyres themselves are influencing races.

On the Mercedes test, my feelings are clear. Regardless of what other agreements may have been reached, the sporting regulations explicitly forbid the use of a current car for any form of testing other than within strict limits, which the Mercedes one fell outside.

Equally, while Pirelli say Mercedes will not have gained anything from the test, that's simply not the case. It may well have been in strictly controlled conditions, but any running a team does is beneficial.

Pirelli have said that the test was not 'secret' and there have been suggestions that the other teams should have spotted it was happening because it was at the same track as a race had just been held at, but I don't buy that.

Governing body the FIA has now got involved in that row and it will be some time before it is resolved.

In the meantime, there is the ongoing debate about the racing, with some teams wanting the tyres changed to make them more durable and Pirelli wanting to tweak the rear tyres to prevent the failures through delamination that have happened a few times this season.

The latest stage of that whole debate happens in Canada this weekend, where the teams will be given examples of the new rear tyre Pirelli wants to introduce for the rest of the season.

Pirelli hope using them will convince the teams who are against changing the tyres that doing so will not, as they fear, put them at a competitive disadvantage.

The two teams putting on most pressure to revise the rear tyres and make them more durable have been Red Bull and Mercedes: Red Bull because they feel their car could go faster if the tyres were more consistent; Mercedes because they are struggling with excessive rear tyre usage.

Lotus, Ferrari and Force India - whose cars have proved to be most effective on tyres in the races so far this season - have been blocking the change so far.

If it's OK for one team to design better aerodynamics; why should another not be able to work with the tyres better? It's all part of the job you have to do as a Formula 1 team.

Working with tyres has always been complicated. This year, teams have for example been switching the rear tyres around, putting the tyre marked as left on the right wheel and vice versa in an attempt to get better tyre life.

These sorts of things have always gone on in F1.

I remember an incident in Canada back in 1997 when I was at Jordan. Most teams were using Goodyear tyres and during the first practice session, to everyone's surprise including Goodyear, the majority of cars were blistering the rear tyres to an extent that some were delaminating.

On the Friday evening Goodyear wanted to call a meeting of all the teams to discuss the problem as it was a real safety issue that had not popped up before.

But as F1 is very competitive most teams didn't want to do this and we all went about our own fixes.

I have always tried to think outside the box and while Goodyear shaved some rubber off the inner shoulder of some teams' tyres and other teams altered the car set-up, I believed it was more of a problem with the inherent tyre design and sat down with Goodyear to try to understand the tyre a little better.

Goodyear, like Pirelli do now, fitted the tyres to rotate in a certain direction, and after a long conversation it came to light that the tyre had what is called "ply steer".

This means that when the rear tyre is driving the car forward, the tread of the tyre wants to steer off at a small angle to the direction of the rim it is mounted on. This is created in the construction and that is why the tyres are mounted in a certain direction.

To discover the actual direction the "ply steer" tried to force the tyre, the Goodyear engineers at the track had to call back to their base in Akron, Ohio, to ask the designers/engineers.

After getting the information, I thought about it for a while and asked them to mount the tyres to run in the opposite direction.

They were not keen initially, as it meant stripping and re-mounting all our rear tyres, but eventually they agreed and prepared two sets for us to run in the Saturday morning session.

Guess what? Next day we had no blisters and all the other teams did.

Annoyingly, Goodyear then changed the tyres of all the big teams before they would do ours. This meant we struggled to get the tyres up to temperature before qualifying.

Anyway, from there on in Goodyear rear tyres were mounted in the opposite direction at all tracks.

The reason the problem existed was because, to get rear-end stability at the majority of tracks, the back wheels of an F1 car run with 'toe-in' - a bit like if you were pigeon toed.

If the "ply steer" is going towards the outside of the tyre, then you will have to use more toe-in to get the stability. This creates more heat in the tyre because it is slipping more going down the straights - it will actually slow the car down on the straight.

If you turn the tyre around and the "ply steer" is running in the same direction as the toe-in then you can use less toe-in and reduce the heat in the tyre. At least this was my thinking and it did work.

On the front the problem is different as you are not applying driving torque, only braking torque for a very short time, so the "ply steer" is not such an issue.

However, it can alter the car's turn-in characteristics so, depending on the car, running the tyres differently will change how the rubber degrades.

The point being that many of the teams have obviously discovered these same sorts of characteristics in the Pirellis.

Many aspects of the way tyres are run - such as the direction they rotate - change the way they behave, for better or worse. It may be that things Mercedes and Red Bull are doing are hurting as well as helping them.

That's not Pirelli's fault. Sometimes, you can fix things that are going on with the tyres with a bit of lateral thinking.

How many people are involved in aerodynamics at Red Bull? Probably 150. How many tyre men have they got? Probably the truckie.

Some teams maybe understand the tyres a bit more than others. Good for them. That's important because they are the four things that connect the car to the ground.

That's not a reason to change the tyres; it's a reason for some teams to do a better job.