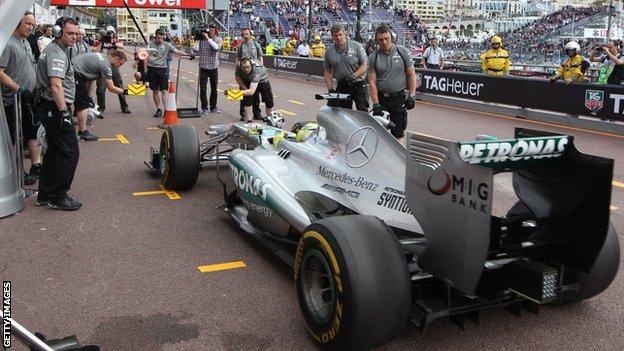 Formula 1 will spend the next few weeks in political turmoil as a result of the fall-out from Mercedes' 'secret' tyre test last month.

Mercedes has been called to account for its actions in taking part in a Pirelli tyre test with its current car at Barcelona's Circuit de Catalunya last month.

The F1 sporting regulations explicitly forbid using a current car in any such test - as part of restrictions on the amount of testing teams can do.

No date has yet been set for the hearing of the international tribunal, which is an independent body led by a senior lawyer.

This is the first time the tribunal has been used to assess a claim of rule-breaking in F1, and it is part of a new process set up by the world governing body's president Jean Todt to demonstrate greater transparency in such issues than in the past.

All possible penalties are open to them - from exclusion from the world championship (which won't happen), through fines, slaps on the wrist or even nothing at all.

WHAT'S THE ROW ABOUT?

The issue broke cover over the Monaco Grand Prix weekend, when it emerged that Mercedes had conducted a three-day, 1,000km tyre test for Pirelli in the gap between that race and the preceding Spanish Grand Prix.

Rivals were incensed. They had not been informed of the test and they considered that it was unfair, underhand and likely to give Mercedes a competitive advantage.

Ferrari and Red Bull launched an official protest - to establish, they said, "clarity" about what was and was not allowed in the regulations in terms of testing - and as that was emerging on race morning in Monaco, it also became clear that Ferrari had also conducted a tyre test for Pirelli, between the Bahrain and Spanish Grands Prix.

Although the FIA has asked for written submissions from both teams, it is Mercedes that rival teams are up in arms about. That's because they used a current race car (as well as race drivers Lewis Hamilton and Nico Rosberg).

Ferrari, by contrast, used a 2011 car, which most teams believe to be allowed within the testing regulations. The Italian team have been cleared of any wrongdoing and will not be part of the tribunal hearing.

WHY IS THERE A DEBATE ABOUT WHAT IS ALLOWED?

The Formula 1 regulations are notoriously vague.

In most cases this is to allow the FIA room for manoeuvre in applying them - the general philosophy is that the more things are nailed down, the easier it is for teams to find ways to circumnavigate them. By contrast, a general observation - such as, for example, traction control is illegal - allows the FIA to decide what traction control is should the issue arise.

The problem with this approach is that it often leads to regulations that are open to interpretation - and this is not helped by the fact that all the relevant agreements are not contained within the regulations. Sometimes there are 'clarifications' of meaning that supersede them; at other times there are separate agreements, as there are over testing.

So in this instance, the regulation in question is article 22 of the sporting regulations, which effectively bans in-season testing other than one three-day 'young driver test', four one-day aerodynamic tests on a straight-line or constant radius facility or 'promotional events', which are limited to 100km.

Ferrari and Red Bull protested under article 22.4, which defines the specifics of the testing allowed. But the argument has come to be just as much about article 22.1, which defines testing as something that uses "cars which conform substantially with the current Formula 1 technical regulations in addition to those from the previous or subsequent year".

It's clear from that rule that using a current car is not allowed - although even that is in dispute, which we will come on to in a moment. Less clear is whether a 2011 car is.

Most of the teams think using a two-year-old car is acceptable - after all, Pirelli used a 2010 Renault (now Lotus) as their test car last year. But it can be argued - and Mercedes may well do so - that, depending on how you look at it, a 2013 car is not "substantially" different from a 2011 car.

That's because while there have been rule changes - and ones that make huge performance differences of more than a second a lap, particularly in terms of exhaust-blown diffusers and flexibility of front wings - they have not been in that many areas of the car.

The same argument can be used about 2012 in relation to 2010, though, and many would view it as more of a legal argument than a realistic one. But then this may very well go legal.

Many of the teams regarded the FIA's decision to ask for an explanation from Ferrari as a distraction from the fundamental point. Which, as Ferrari put it, is that "Mercedes used a 2013 car and that is not permitted".

According to the sporting regulations, they are correct. But the problem is that Pirelli has an agreement with the FIA that says it is allowed to ask teams to do tests of up to 1,000km in length for development work.

The test in question, Pirelli says, was largely to help them work on tyres for 2014, when new engine rules will have a dramatic effect on tyre wear.

Pirelli says about 90% of the work done at the Mercedes test was based on 2014, and the rest on 2013. And that's where things get very controversial.

The Italian manufacturer wants to change the rear tyres as soon as possible to prevent the failures that have occurred at some races this season.

But to do so it needs agreement from all the teams and some have not agreed - notably Ferrari, Lotus and Force India - because they believe it would help teams who have yet to get on top of tyre wear.

Chief among these are Mercedes - hence the outrage that they would be allowed to test tyres that could be used this season.

Pirelli say Mercedes got no advantage from the test as the tyre company did not reveal which tyres were which and the team were not allowed to change the set-up of the car. Rivals say that's not the point - any running is an advantage.

As an aside, development rear Pirellis - fundamentally the ones Mercedes ran in their controversial test - will be available for teams to try in Canada this weekend with a view to them being introduced from the next race in Britain if the teams agree.

None of which deals with the question of the use of the 2013 car, which still seems to be outlawed. Mercedes say they discussed this with the FIA and got their approval.

But a statement from the FIA on Sunday evening in Monaco said that while it had accepted the principle and that "such a development test could be possible if carried out by Pirelli", it added that "such tests would be conditional upon every team being given the same opportunity to test in order to ensure full sporting equity" and that "the FIA received no confirmation that all teams had been given an opportunity to take part in this test".

The row has thrown a spotlight on the rather vague testing regulations in F1 and how the teams are exploiting them to their advantage.

For example, the regulations allow "promotional events" on non-race tyres, limited to 100km, and teams use these to try out new parts.

And it should not be forgotten that the issue has arisen out of Pirelli's need to test tyres and its frustration at the teams' inability to agree on how that should be done in an equitable manner.

Then there are the politics involved.

Memories are long in F1, and senior figures at various teams have not forgotten that when Mercedes team principal Ross Brawn was technical director of Ferrari and Benetton during the Michael Schumacher era, there was a consistent and widespread belief that his teams were pushing the rules to breaking point.

WILL ANYONE COME OUT OF IT WELL?

Whatever the result, this will have been an uncomfortable period for Mercedes, a company desperate for consistent success in F1 and whose F1 team are currently in a tricky transitional phase.

That period will eventually end in Brawn leaving his current role and the team being run by a new pairing of Mercedes sports boss and F1 executive director (business) Toto Wolff - appointed only in January - and former McLaren technical director Paddy Lowe, who started his new role as Mercedes executive director (technical) on Monday, 3 June.

And then there is the FIA. Their position generally - and Todt's in particular - is uncomfortable to say the least.

Todt used to be team boss at Ferrari - when Brawn and Schumacher were there. He left the team under something of a cloud, having fallen out with president Luca Di Montezemolo, but that is less well known than the fact that he was there at all, and had a great deal of success when he was.

"Pirelli is believed to be considering changing the tyres it is supplying to Formula 1 this season in the wake of criticism that they may be too soft - but it's questionable whether that is the right thing to do."

Meanwhile, Mercedes has commercial agreements with F1 - through the Allsport company that has long-standing links with F1 boss Bernie Ecclestone - which include the supply of the safety and medical cars used at each race.

All of this explains why Todt has been careful to keep himself out of this as much as possible. That includes setting up a new process to judge it from the one formerly used by his predecessor Max Mosley, who was accused of acting as prosecutor, judge and jury.

It will be Todt who decides whether to pursue either team once he receives their written submissions, but after that he will be involved only as an observer. The International Tribunal and its judging panel is independent.

That will help with transparency - something about which Todt is said to feel quite strongly.

As he does also about this whole topic, judging by the speed with which the FIA responded on Sunday in Monaco and the way in which Todt has intervened so strongly when his more usual modus operandi as president has been to stand back and not get involved.

All in all, it is hard to get away from the impression that it is a bit of a mess that could have been avoided had those involved approached it in a slightly different way.

In F1 such is the way of things all too often.