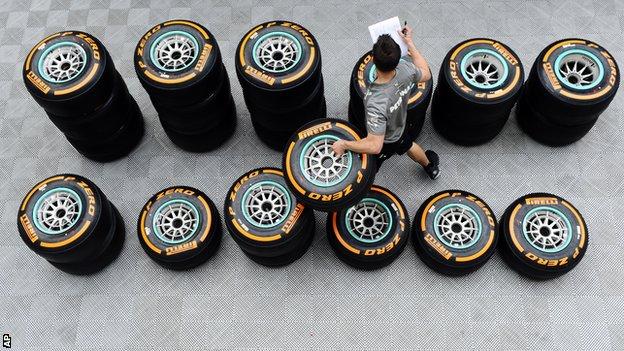 Pirelli have decided to change the tyres they supply to Formula 1 from next month's Canadian Grand Prix, and you have to wonder why.

The decision has come after much controversy following Sunday's Spanish Grand Prix, which brought to a head complaints that have been growing all season.

These are that the need for drivers to manage the tyres, which have been designed to run out of grip quickly to ensure teams have to make multiple pit stops, has become too big a feature in races.

Viewers and spectators are not happy with the fact the drivers are not pushing to the limit all the time and feel the sport is in some way being polluted. Some say that F1 has become too artificial as a result, that it looks manipulated.

In 2011, Vettel won the Spanish Grand Prix. He also made four pit stops and there were 77 pit stops in the entire race. There were no complaints from Red Bull then

At the same time, Red Bull have been complaining that the tyres are restricting their cars' performance, and they have done a good job of getting into the public consciousness the idea that this is happening with all the cars.

But if you look at the data, things are not so different this year than they have been at any time since Pirelli became the sport's sole supplier in 2011, or even in the last year of Bridgestone tyres in 2010.

This year, Ferrari's Fernando Alonso won the Spanish Grand Prix making four pit stops, and there were 79 pit stops in the entire race.

Red Bull team boss Christian Horner complained on Sunday that it was "too confusing for the fans", and that "it wasn't great" for his team to be heard telling their driver Sebastian Vettel not to race Lotus's Kimi Raikkonen when he came up behind him. Red Bull's owner Dietrich Mateschitz went further, saying F1 was not a sport any more.

In 2011, Vettel won the Spanish Grand Prix. He also made four pit stops and there were 77 pit stops in the entire race. There were no complaints from Red Bull then.

If you want to know how hard drivers can push in a race, the best way is to compare both the race fastest lap and the average race lap time with the pole qualifying time.

I have compared data from the last four Spanish Grands Prix, including 2010. It gives an interesting result.

This would seem to undermine two key complaints being levelled at F1 at the moment - that the Pirelli tyres have dramatically affected the ability for drivers to push hard in races, and that this has markedly worsened in 2013.

It also rather undermines Pirelli's claim that the cars are three seconds a lap faster this year and that this is overworking the tyres.

Announcing the change to the tyres, Pirelli said it was "for the good of the sport" and insisted it had not come about as a result of pressure from Red Bull.

But it also admitted the new tyres it produces will prevent the worrying-looking delaminations that have been seen in recent races, where a cut in the rubber leads to the tread being thrown off.

I suspect this last reason is one of the main motivations for the change. It's not good PR for a company to have its tyres fall apart like that on global television.

WHAT'S CHANGING AND WHAT EFFECT WILL IT HAVE?

The big question is what exactly is changing about the tyres, and whether it will favour one team over another.

Pirelli has not yet said what it will do, but the strong suspicion is that it will keep the front tyres the same and change the rears so they are more like last year's. It may even go as far as to use last year's rear tyres.

In 2012, the rear tyres had a different construction that allowed the carcass to expand more at speed. In addition, the material used meant any cuts from carbon-fibre debris on the circuit would result in a deflation rather than a delamination.

If Pirelli goes back in this direction, as expected, it will help prevent the tyre trying to throw off its rubber when it is damaged.

The front tyre is the one that most affects the performance of the car. Its profile and shape, the shape of the contact patch and so on, has a significant effect on the aerodynamics.

By contrast, changes to the rear tyre only affect the performance of the tyre itself, as opposed to making a crucial difference to the airflow around the car.

I bet if you were to ask all the teams to choose the two tyres they wanted to take to Monaco next week - the last race before the tyres change - they would all go for the super-soft and soft. Which is exactly the selection Pirelli has made.

Last year, the vast majority of the time, it was the rear tyres that first started to lose grip during a race.

But in Spain, Vettel's problem was that the front tyres were getting too hot and he was having to slow down to stop them overheating and degrading. So if the front tyres are not changing, that won't help Red Bull in that situation.

Mercedes, who have been going backwards in races after qualifying well, have the opposite problem. Their car is rear-tyre limited.

This year's tyres are stiffer in construction than last year's, so most teams are running the pressures lower to try to make the tyres more compliant - they don't want that stiffness in the rear of the car because it makes traction worse.

So a less stiff construction might help Mercedes because it will bring the rear suspension and tyres more into harmony and improve their traction, reducing the load on the rear tyre.

IS IT FAIR TO CHANGE THE TYRES MID-SEASON?

At the final grand prix of last season in Brazil, Pirelli supplied a prototype version of the new 2013 tyre for the teams to try.

The idea was that it would give them data to work with over the winter so they could prepare their cars.

The teams have worked with those tyres throughout pre-season testing and now for five races, and a pattern is emerging.

Mercedes have a fast car in qualifying that goes backwards in races because of excessive rear-tyre wear.

Red Bull have the next fastest qualifying car but their race-qualifying compromise is far better than the Mercedes, to the extent that Vettel has won two races so far and has secured a third place and two fourths from the others. He is leading the championship as a result.

But Red Bull are, at certain circuits, struggling to keep the tyres alive for as long as Ferrari and Lotus, who are not quite as fast in qualifying but look after the tyres better in races. Ferrari have probably the best race-qualifying compromise of all.

Alonso has won twice and been second once. Had he and the team not made the errors they did in Malaysia and Bahrain, he would almost certainly be leading the championship by a small margin from Vettel, rather than trailing him by 17 points.

So, you can say that Ferrari have done the best job of adapting their car to the demands of the tyres.

That's basically what a team's job is - to get the best out of the equipment at their disposal.

It's not really right to mess with that in the middle of the season. It will create a lot of work for the teams and, while we can't be sure, it could well undo all the good work some have done to the benefit of others, who have done their jobs less well.

Inevitably, that will mean people will always wonder whether this change has affected the results - and, in the end, whether the right guy won the championship

Personally, I think if Pirelli were worried about the life of the tyres, a fairer choice would have been simply to go one stage harder on the compound - create a new 'hard' tyre and throw away the current 'super-soft'. The current 'soft' would become the 'super-soft', the current 'medium' the 'soft' and the current 'hard' the 'medium'.

The problem now is that the sport is open to accusations of meddling, and some people are going to be suspicious of the motives for it.

Inevitably, that will mean people will always wonder whether this change has affected the results - and, in the end, whether the right guy won the championship.