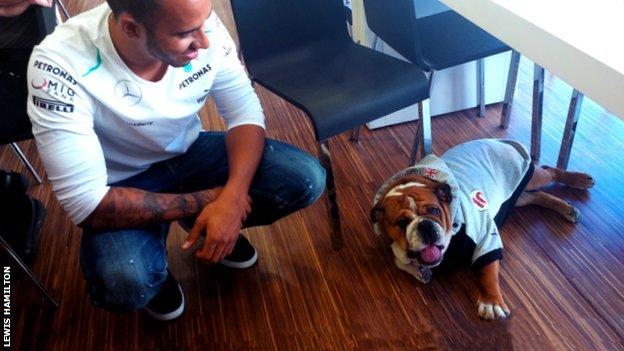 In his latest column for BBC Sport, Lewis Hamilton talks about how he hates training, enjoys wakeboarding and water skiing, and tries to avoid sharks. Plus Mercedes' new car upgrades for Spain - and an introduction to his pet bulldog, Roscoe.

I am back racing in Barcelona this weekend and have had a great three-week break. Since the last race in Bahrain I have been keeping myself busy.

I have a long-distance relationship and have to manage my schedule between making sure I spend time with my partner and also ensuring I get to the Mercedes factory and do my physical training. It's a tricky balance but we make it work.

After Bahrain, I flew to the UK and did the Graham Norton show and a big interview with Sir David Frost (legend), before driving up to Brackley to spend time with the team the next day.

We had a four-hour meeting with all of our engineers, discussing the first four races and where the car can be improved. It's great for them to get the feedback directly from the drivers.

From there, I flew straight to the States and my trainer came with me.

We tend to get up really early and go running at about 6am. We'd either run the Canyons for an hour in the Hollywood Hills, which is a really high-intensity run, or we'd run by the beach. In which case it would be a long, one-and-a-half hour session.

In the afternoon, at around 2pm, we'd do a gym session for an hour and a half or so.

In that session we work on my neck muscles, which have to be really strong because of the high G-forces in an F1 car. Then we would alternate other exercises from day-to day, focusing on different body areas.

One day it would be chest and biceps, the next day the back, then legs and so on.

Lots of other drivers like cycling but I'm not so keen. I have some really cool bikes, but I'm just not in love with it like Jenson Button and Fernando Alonso.

I don't do it too often - although I may get back into it in Monaco now it's getting to summer. I'll need to get some practice in before I go and do it with Jenson and those guys, though.

Overall, I'd say we do about four hours' training a day during the season. We do more in the winter, but once the season has started, it's all about maintaining the energy and fitness. You have to be careful not to overdo it.

You have to make sure you give yourself enough time to recover, otherwise you won't be in the best shape for the races.

Generally, I hate training - just like most people, I guess. I try to make it fun and varied.

I really like to play to squash, because it's competitive, and I like basketball. I'm friends with a guy in LA called Andrew Bynum, who used to play for the LA Lakers NBA team. We play together sometimes.

That's pretty cool - but he just kills me. I can pretty much run through his legs.

I'm keen on hiking. And in Monaco, I also like water skiing, wakeboarding and jet-skiing, which are all pretty good for your arms, legs and core stability.

I tend not to do that in LA, though, because the ocean is pretty cold and there are some serious sharks out there - although there is a lake that I'm thinking about heading out to one of these days.

Once the training is done, I tend to spend the time in the recording studio, writing with a couple of friends.

You may know that I have a dog - an English bulldog called Roscoe - and he is with me in Spain this weekend.

Bernie has said that he can come into the paddock with me, which is pretty cool.

He's got a bit of a limp at the moment because he slipped on something at my parents' house the other day.

I'm staying in a motorhome at the track and my sister is looking after him when I'm busy. I'm going to try to bring him into the paddock the odd time if I can.

But we obviously have to be a bit careful because F1 cars are pretty loud if you're a human, never mind for dogs. His welfare is the most important thing, so he won't be coming into the garage with me or anything like that.

It's great having him with me. He is so much fun - I've got really attached to him really quickly, as you'll know if you've been following me on Twitter.

We've had dogs in the family since I was born. What I love about them is how loyal they are.

No matter what kind of day you're having, they are always there, always loving, and always happy to see you.

My dog follows me everywhere. When I pack my bag, he watches me. When I go to bed, he either gets on the bed or sits down on the floor, and you can hear him snoring. When I'm on the computer or doing emails, he sits by my feet while he's sleeping. They really are man's best friend.

Why a bulldog? I've just always wanted one. Everyone said I wouldn't be able to look after him, and I was determined to prove them wrong. My mum went to pick him up over Christmas while I was out training in Colorado and looked after him the month I was out there and now he is going to travel to all of the European races with me.

I'm really excited about getting back racing this weekend.

Everyone brings upgrades to this race, the first one in Europe, and the question is how big will ours be compared to everyone else's.

I'm told that because the current rules are now into their fifth year, teams are getting to the end of the road in terms of evolution, so I don't expect people are going to come here and gain half a second.

I suspect it will be smaller steps than that, and fine-tuning through the year, but I'm really positive about the changes we have made on the car.

This was a good track for us during pre-season testing and I hope it will be again.