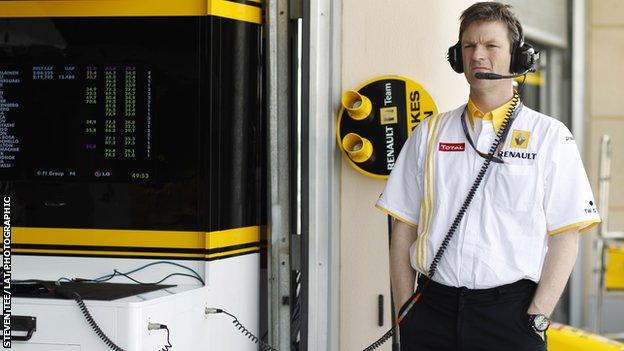 Lotus technical director James Allison, one of the most highly regarded design engineers in F1, is to leave the team.

He has been replaced by Nick Chester, who has been promoted from his role as head of vehicle performance.

It is not known which team Allison will join but Ferrari are strong favourites.

Allison has had an offer from McLaren, which he is understood to have turned down, and has also been approached by Williams and Mercedes.

His departure is a blow to Lotus, whose driver Kimi Raikkonen is second in the world championship to Red Bull's Sebastian Vettel ahead of the fifth race of the season in Spain this weekend.

Team boss Eric Boullier said: "Nick is already directly involved with this and next year's cars, ensuring a smooth transition which has been under way for some time."

Boullier said Chester was already working on the design for the team's 2014 car, which will be built to new regulations that include the introduction of 1.6-litre V6 turbo engines with extensive energy recovery, to replace this year's 2.4-litre normally aspirated V8s.

Boullier said: "He assumes his new position at a tremendously exciting time for the sport. The 2014 technical regulation changes present many challenges, while our current position of second place in both the constructors' and drivers' world championships mean we cannot lose sight of this year's development battle.

"Nick really has his work cut out, but we know he is more than capable of handling the tasks ahead."

Allison's future has been the subject of fevered speculation in F1 for some weeks.

He has been linked to all the top teams - Red Bull, McLaren, Ferrari and Mercedes - as well as Williams. But a Red Bull source dismissed the notion that Allison would be joining them and BBC Sport understands Allison has rejected an offer from McLaren.

Ferrari president Luca di Montezemolo was asked on Wednesday, at a corporate presentation at the company's base in Maranello, whether there was any truth in talk of Allison return. "It's just a rumour," he said.

Mercedes motorsport director Toto Wolff told BBC Sport that Allison had been approached by Niki Lauda, the team's non-executive director, during the winter but insisted that it was a "historical discussion", appearing to rule out his appointment.

Mercedes have already signed former McLaren technical director Paddy Lowe, who will join the team in 2014 in a senior technical role overseeing the team's current structure.

Lowe is earmarked as a long-term successor to team principal Ross Brawn, but the two may well work together for some time as Lowe is faded in and Brawn edges towards retirement.

Wolff said that Lauda had approached Allison last winter as part of his fact-finding about which personnel might be available as Mercedes assessed its options for improving the team's performance.

Wolff said: "He started to speak to the good guys and asking them what their current employment situation was, and one was James Allison.

"That was a historical discussion, which I think was December, and this is when I came in and we stopped all that."

If Allison does move to Ferrari, it is unclear what role he would take. The team's current technical director is Pat Fry, who has been in his role for less than two years.

Fry and Allison have previously been colleagues, at the Benetton team in the 1990s.

Allison worked at Ferrari for five years from 2000, the period during which they dominated F1 with Michael Schumacher, before moving back to Renault - renamed Lotus in 2012 - in 2005 as deputy technical director.

He was in that role when Fernando Alonso won his two titles for the team in 2005 and 2006 before being promoted to technical director in 2009.