The new Formula 1 season caught fire in the tropical intensity of Malaysia on Sunday as old wounds were torn open in the relationship between Red Bull drivers Sebastian Vettel and Mark Webber, and new ones potentially created at Mercedes.

Team orders - always a sensitive and controversial subject - were at the centre of both situations. They were resolved in starkly different ways.

Seb's obviously chosen to hear what he wants to hear. He's a race driver, he's competitive, he's hungry. He hasn't achieved what he has by not pushing the limits and he has pushed that today with his team-mate and the team

That decision by the three-time world champion revealed a lot about Vettel himself, and - some will say - the balance of power within Red Bull.

There is steel within Vettel that is hidden by his generally sunny, easy-going and good-humoured manner in public and it was laid bare in his behaviour after the final pit stops in Sepang.

Worried about excessive tyre wear, Red Bull had discussed before the race that in such a situation the drivers would hold station. So Vettel knew full well what the call meant when it came over the radio, even if it came dressed in team code.

He got himself into quite a pickle over it after the race, even after he took it upon himself to apologise - an apology about which you don't have to try too hard to imagine Webber's feelings.

Initially, on the podium, Vettel tried to gloss over it. Webber, as clever as he is direct, was having none of it.

"After the last stop the team told me the race was over," Webber said. "We turned the engines down and we go to the end.

"I want to race as well but the team made a decision, which we always say before the race is how it's going to be. Seb made his own decisions today and will have protection and that's the way it goes."

The obvious out there, Vettel had no choice but to hold up his hands and apologise.

"I didn't ignore [the order] on purpose," he said in the post-race news conference. "I messed up in that situation and obviously took the lead. I can see now he's upset. I want to be honest and stick to the truth and apologise. I know that it doesn't really help his feelings right now."

Straight afterwards, talking to BBC F1 pit-lane reporter Lee McKenzie, Vettel added: "We talked about this many times before the race. It very rarely happens. Today it did and I should have translated the call into action.

"I just didn't get the message. I got it. I heard it. But obviously no action followed because I misunderstood."

What to make of those confusing and contradictory remarks? Team boss Christian Horner did his best to explain.

"He's obviously chosen to hear what he wants to hear," Horner said. "He's a race driver, he's competitive, he's hungry. He hasn't achieved the championships he has by not pushing the limits and he has pushed that today with his team-mate and the team."

Why, Horner was asked, did he not order Vettel to give the place back, given there were more than 10 laps to go?

"Do you honestly think if we had told him to slow down and give the place back he'd have given it back?" he said.

Did you try, the questioner countered?

"There's no point," Horner responded. "He'd made it quite clear what his intention was by making the move. He knew what the communication was. He chose to ignore it."

Although Vettel later said that if he had the chance to go back he would behave differently, the question on many lips will be why he did not do so in the first place.

The contrast with Rosberg's behaviour was striking.

Like Vettel, he too was closing on his team-mate in the final laps. Hamilton, who had had the edge on Rosberg earlier in the race, was powerless to respond because he was short on fuel.

But Brawn told Rosberg to hold station and - after questioning the call at least twice - the German did what he was told. "I wouldn't say they owe me one because I understand," Rosberg said later.

The battle between Hamilton and Rosberg may yet develop in the fashion of that between Vettel and Webber. For now, though, the focus will be on Red Bull.

In the difference between Vettel's and Rosberg's behaviour, in Horner's belief that he was powerless to intervene, and in Webber's reference to "protection", many in F1 will see what is widely regarded to be the reality at Red Bull - that it is Vettel's team, and he behaves as he pleases. 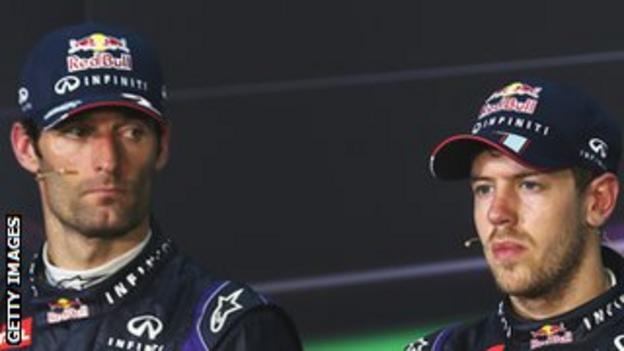 Horner was right after the race to point out that there have been times in the past when Webber has been behind and told to hold station and continued to race.

Not once, though, when Vettel has been leading and Webber second, has the Australian taken the win, either through ignoring obvious team orders or otherwise.

But there have been plenty of times when he has been behind and obeyed an order not to challenge his team-mate.

"Yeah, we've had a few," said Webber, who has often spoken of how he would never give up a win for anyone. "Even back in the days when it was probably not that acceptable to do [when team orders were banned]."

What will people make of Vettel's actions in Malaysia? Was he ruthless? Spoilt? Arrogant? Disingenuous? Insincere? People will come to all those conclusions and more besides.

Despite his apology, indeed, many will conclude that he knew exactly what he was doing - that with his likely biggest title rival, Ferrari's Fernando Alonso, out of the race and a long, tough battle ahead, the extra seven points that were on offer for victory rather than second place were too tempting to resist. And that he knew he would get away with it if he went for them.

The interesting thing will be what happens in the future, both in the way he behaves if a similar situation arises, and how Red Bull handle it going forward.

As for Webber, one can only imagine what is going through his mind.

Last summer, he decided against a move to Ferrari, despite concerns about Red Bull's support for Vettel, because, in the end, he felt Red Bull would have the fastest car and were his best chance for success.

During the winter, Red Bull motorsport chief Helmut Marko made some highly disparaging remarks about Webber in the company's own magazine.

They were prompted by Marko's belief that Webber had not been properly supportive of Vettel's ultimately successful attempt to win a third world title at the season finale in Brazil last year - that, in fact, Webber had been obstructive to his team-mate out on the track that day.

In the wake of those remarks, Webber was asked at the launch of the new Red Bull in February whether he felt he would be allowed to fight with Vettel for the title.

"I do believe I can," he replied. "That is my goal. That is what I am getting up for each day and thinking about. They know I need 100% support. You cannot win world championships with 90% support. We are going into 2013 with this in place. I'm comfortable with that."

On Sunday, Lee McKenzie asked him the same question again.

"This was something that was in my mind in the last part of the grand prix and it's a completely fair question, Lee, that you ask that," Webber said.

"Obviously we know Seb is no slouch but you need to have strong people all the way through the team to have everyone having the chance to get the maximum result."