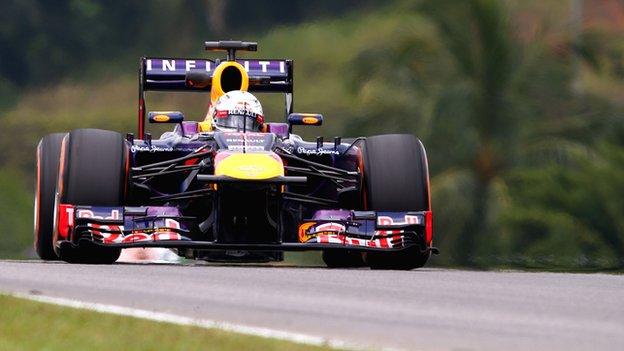 Red Bull's Mark Webber was fourth ahead of Lotus driver Kimi Raikkonen, who did not look as comfortable as he had in an impressive performance on Friday.

BBC F1 technical analyst Gary Anderson said: "We know the Red Bulls have that one-lap pace. We saw that at the first race in Australia last weekend. Looking after the tyres in the race is another matter.

Ferrari appeared to be struggling for pace - Alonso was 0.867 seconds off Vettel and was also 0.356secs adrift of team-mate Felipe Massa, who was eighth fastest.

Ferrari technical director Pat Fry said after Friday practice that the team still had work to do: "I still think we're behind. And we still need to keep on developing so we can catch up and hopefully pull out a lead.

"You can't hide from the truth. Last year we didn't have the quickest car; maybe we did at one race. We still haven't got the quickest car. We need to develop it so it is."

The Ferraris were split by Nico Rosberg's Mercedes, 0.381secs behind team-mate Hamilton.

The Englishman suffered a torn tread on his right front tyre at the end of the session.

Raikkonen complained that the car was too "on the nose" - had too much front grip. BBC 5 live pit-lane reporter Jennie Gow reported that the team had not changed the car significantly overnight but that the track conditions had changed.

Button's performance was encouraging for McLaren, who were uncompetitive at the season-opening race in Australia last weekend.

On Friday he had suggested that part of the team's improvement was down to the layout and surface of the Malaysian track highlighting the weaknesses of the McLaren car less than Melbourne's Albert Park.

"I don't think we've improved the car in terms of ride quality," Button said. "The circuit has helped us in being smoother - we have been able to get the car closer to its peak in terms of where the downforce and ride-height curve is.

"It's still not quick but I feel we're doing a good job of working towards the best possible set-up with the car."

His team-mate Sergio Perez was only 12th fastest, 1.103secs off the pace.

The line-up sets the scene for an intriguing qualifying session at 08:00 GMT.